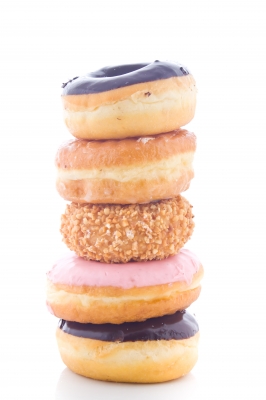 Dunkin' Donuts is venturing westward, led not by its signature sugar-coated donuts but by its new coffee-centric branding. The Boston-based breakfast eatery is making waves in the fast-food world and proving that an old dog can not only learn new tricks but also conquer new retail markets.

Dunkin' Donuts has thousands of franchise locations on the east coast, but west of the Mississippi, the company has lackluster representation. In an effort to stay viable in all markets and create a retail expansion as far west as California, the donut chain has moved its marketing efforts away from breakfast foods to shine the light on beverages. In fact, the Dunkin' Donuts CFO recently described the chain as a beverage company to investors. Coffee and other drinks offer higher profit margins than food products, and concentrating on pushing its signature brew helps Dunkin' Donuts compete with Starbucks. Leveraging a high-quality cuppa that doesn't hit consumer pockets as hard as a mocha latte from the competition, the donut chain plans to move in on prime Starbucks territory in California.

In an effort to rebrand itself as a coffee house, Dunkin' Donuts is rolling out a new look in many of its retail stores. In addition to attracting coffee-shop enthusiasts, the new design is meant to create an all-day space for consumers. Soft chairs, cozy corners, and free Wi-Fi are some of the tactics Dunkin' Donuts is using to create an inviting space where consumers can linger. The business is incorporating its signature orange into the updated décor in a modern, subdued way, allowing locations to keep the unique Dunkin' Donuts look while catering to contemporary consumers. Following the example of restaurants like Chipotle Mexican Grill and Panera Bread, the donut chain is also working to develop a casual, functional environment that encourages business men and women to enjoy a meal while working.

Dunkin' Donuts' retail expansion isn't all about coffee and ambience, though. Seeking success in health-conscious markets, the chain is introducing gluten-free donuts and muffins. According to a Forbes.com article, Dunkin' Donuts is the first major fast-food chain to adopt gluten-free food measures. With a target of opening 15,000 new stores over the course of the next few years, Dunkin' Donuts is taking advantage of all the available trends in the food and beverage market. Offering healthy food choices is essential in a market that turns its nose up at sugar and fat.

Retail establishments in any niche can't expect to make radical changes without consequences. The rebranding taking place at Dunkin' Donuts illustrates how new ideas can work if you understand the market and plan accordingly. At the same time, the donut chain is taking care to retain elements of its past success, and there's certainly no talk of ditching the melt-in-your mouth glazed treats altogether.