Solar Stronger Than Ever for Engineers in 2011 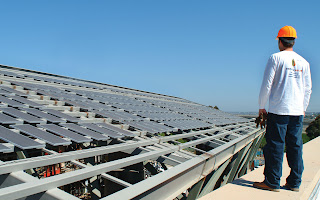 The solar growth trend is expected to continue with solar power capacity doubling in 2011.

According to a recent Bloomberg report, policy measures such as tax credits, capital expenditure grants, incentives and renewable electricity credits will give the U.S. solar industry a healthy boost for at least the next three years. By the middle of the decade, the U.S. retail solar market will experience unsubsidized competition, which could transform the U.S. into one of the world's most powerful solar markets.

A key incentive is the Treasury Grant Program (TGP), which allows the owner of a commercial solar project to receive a 30 percent grant in lieu of taking the solar Investment Tax Credit (ITC). Applicants are eligible for the grant only if they start construction on projects by December 31, 2010 and complete construction by December 31, 2016.

Extending the TGP by two years would create as many as 65,000 new solar and related jobs by 2015. Many of these new jobs would be added in states hardest hit by the current recession—including Ohio, Illinois and Pennsylvania.

The number of solar projects has already pumped up the U.S. solar jobs market. The National Solar Jobs Census 2010, conducted by The Solar Foundation and Green LMI Consulting with technical assistance from Cornell University, noted that over half of solar employers across the U.S. have plans to boost their workforce in 2011.