Speaking Ill of Predecessors is a Sign of Weakness 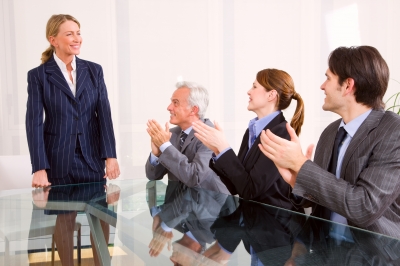 Successful companies recruit business leaders who can take charge and develop beneficial policies without criticizing their predecessors. Badmouthing other professionals shows a lack of confidence and humility, making it difficult for incoming business leaders to earn trust and respect from employees. Good leaders learn from the wins and losses of their predecessors to develop strategies that optimize team performance.

From governments to boardrooms, administrative bodies routinely experience change as new leaders step into managerial roles. Whether hired from inside or outside the company, a business leader faces the challenge of integrating his personality and managerial style into an environment that already has an established chain of command, culture and methodology. Some leaders respond to this pressure by pointing out the flaws in a predecessor's methods or completely changing the workflow process.

While it's important for business leaders to take charge, belittling a past manager puts employees in the awkward position of choosing sides and dismissing the accomplishments of someone they may have admired. Instead of building camaraderie with a new team, leaders who take an offensive stance appear petty, arrogant and unapproachable.

Golden State Warriors coach Steve Kerr provides the perfect example of how a respectful transition yields long-term benefits. In 2014, Kerr replaced coach Mark Jackson, taking over a team that was fiercely loyal to his predecessor. Under Jackson's leadership, the team reached the NBA playoffs for the first time in almost two decades, while in 2015, Kerr led the Warriors to their first championship win in 40 years. Kerr attributes much of his success to humility and constant learning, both of which require him to praise the things Jackson did right.

When Kerr took over, he maintained Jackson's rallying chant and inspirational decor, showing the team that he valued Jackson's legacy and wanted to build upon it, instead of tearing it down. The team needs to see a leader's confidence right away, and speaking ill of a predecessor immediately reveals your weakness, says Kerr. A 2014 Catalyst study found similar findings, in which workers from six countries were more likely to feel valued and included when leaders behaved altruistically, such as showing humility, accepting criticism and admitting mistakes. Because humble business leaders are secure about their own abilities, they're effective at fostering positivity and acknowledging the strengths of others.

Transitioning business leaders can also learn from Kerr's hunger for knowledge. The coach aspires to be a leader who motivates everyone else to raise their game, and he refines his management strategies by studying coaches who achieve success while winning respect and loyalty. Strong leaders are always open to learning more about their craft and even look to experts outside of their field for creative insight on how to keep teams energized while demanding hard work.

Recognizing the expertise and success of past business leaders is often a smart way to connect with a new team. Avoid treating a managerial role like a weapon to control or intimidate others, and use your knowledge of predecessors to develop policies that help your team stay united as you test new growth strategies.