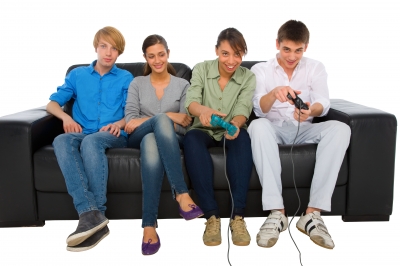 A new video game console generation launches at the end of November. Advertisers inside and outside the gaming industry are watching the new game and hardware advertisements very closely for signs of how each console positions itself in the market. The previous gaming generation saw a large casual market embracing Nintendo’s Wii and more competitive gamers turning towards offerings from Microsoft and Sony. Nintendo’s Wii U beat other gaming industry leaders out of the gate, but ads for the Xbox One and PlayStation 4 show that they are taking the new generation very seriously.

Microsoft’s Xbox One faced a number of challenges as its specs came to life. Intrusive DRM and many functions of the system’s Kinect peripheral created backlash amongst gamers and resulted in the removal of these features from system before launch. The first ad for the Xbox One appeared during football broadcasts and seemed far more focused on use of the console as a home entertainment center instead of for playing video games. Advertising experts prepared additional commercials that aired later and showcased the power of the system's hardware and its gaming potential.

The PlayStation 4 is poised to challenge other gaming industry contenders with high-resolution graphics and stunning gameplay. PS4 commercials focus not only on the hardware, but also on the way that peripheral devices work with the games. Recent advertisements highlight the PS4’s ability to interface with the PlayStation Vita portable console, letting you take your PS4 games with you wherever you go. Other ads available prior to the system launch showcase the large amount of exclusive content available only to those with a PS4. This includes up to an hour of additional gameplay on some titles and first-look access to online games from major publishers.

Nintendo is not lying down. The gaming industry legend’s new console lacks the raw power of the offerings from Microsoft and Sony, but ads from the company focus heavily on group gameplay and the addition of new characters to fighting and racing games that made their previous consoles effective hits. Other contenders in the gaming industry are working on options for gamers but haven’t yet released commercial advertisements. Notable among these is the SteamMachine gaming console from Valve, which only recently released screenshots of its prototype hardware design.

Ads for next-gen gaming products show much of the intent of the advertisers. Much can be learned from how the advertisers target each niche and attempt to woo specific audiences. Whether that audience is sports fans and those looking for a complete home media experience, hardcore gamers who enjoy exclusive content, or those looking for a more casual and social experience, the ads provide many lessons on how the gaming industry draws in viewers to drive company profits.