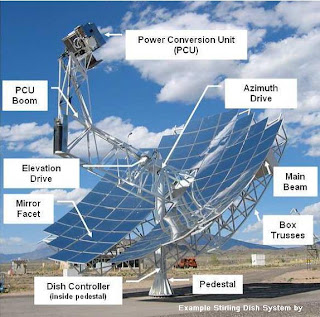 Forget solar panels, at least for now. They're only fractionally efficient when compared to a Stirling solar dish, which engineers are refining almost on a daily basis.

These engineering marvels convert solar heat into mechanical energy to turn an AC electrical generator. Link them up in large farms and you could provide cheap solar electricity for not much more than what you're paying right now.

A Sterling engine consists of a solar parabolic dish that focuses incoming sunlight onto an engine/generator. It exploits the Stirling thermodynamic cycle to produce electricity without first having to produce steam. The parabolic dish reflector automatically follows the sun, producing temperatures in the range of 1,450 degrees F in the fluid receiving the focused solar energy. A typical Sterling solar dish can produce anywhere from 3kW to 25 kW. Combine them in an array and you've got a solar plant capable of producing electrical power at the megawatt level.

Sterling engines can be built with extremely high conversion efficiencies--up to 30 percent--the highest conversion efficiency of any device that concentrates solar power. The solar parabolic dish system is a self-contained power source with a minimal need for water. The air-cooled engine needs no dry air condenser.

Last year, there were no commercial Stirling engine solar plants in operation; however, a number of these plants are in the planning stages in the southwestern U.S. and around the world.