Sun Exposure Could Help With Diabetes 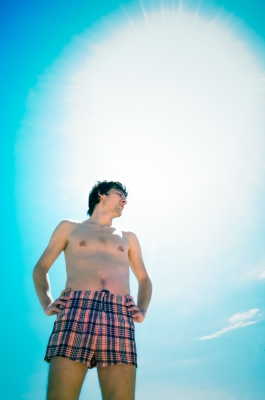 Sun exposure is a hot topic these days. Some health experts advise against it, due to the increased risk of skin cancer, while others tout the many benefits of regular sun exposure. One new Australian study may suggest that moderate sun exposure can help prevent the onset of diabetes and obesity in adults.

Sun exposure, specifically exposure to UV radiation, has long been associated with increased risk of skin cancer. Leading health organizations such as the Centers for Disease Control recommend limiting exposure to the sun and wearing protective gear, such as sunglasses, hats and sunscreen. However, it is also well-known that sun exposure is the body's main source of vitamin D. Vitamin D deficiency is associated with higher mortality rates and cancer prognoses, among other negative health effects. In 2013, a study performed at the University of Edinburgh suggested the heart-health benefits of moderate sun exposure outweighed any increased skin cancer risk.

Dr. Richard Weller, who led the Edinburgh study, worked with Dr. Shelly Gorman of Telethon Kids Institute in Perth, Australia on the study regarding sun exposure, diabetes and obesity. The research team fed mice a high-fat diet to encourage the onset of obesity and diabetes, then exposed the mice to moderate levels of radiation. Over time, researchers say, the mice showed less weight gain and exhibited fewer signs of diabetes such as insulin resistance and high blood sugar.

The researchers took the study one step further to determine if these effects were due to increased vitamin D levels, or nitric oxide, a compound released by the skin after sun exposure. To determine this, researchers supplemented half the mice with vitamin D, while the other mice were rubbed with a nitric oxide cream. The team found that vitamin D did not create the same positive effects as the nitric oxide cream. What's more, previous research on nitric oxide claims it also has positive effects on blood pressure. Dr. Martin Feelisch of the University of Southampton, one of the study's authors, commented that the findings indicate that nitric oxide may benefit not only the cardiovascular system but also the way the body regulates metabolism.

These findings breathe new life into the battle against obesity, which is of particular concern to America. A 2010 report issued by the Centers for Disease Control state that the percentage of extremely obese adults in the U.S. tripled between the 1970s and 2010. Along with general advice to adopt a healthy diet and exercise regime, moderate sun exposure may help prevent obesity, particularly in children.

While the studies performed are indeed intriguing, Dr. Gorman and the rest of the research team emphasize the fact that the studies were performed on mice. Mice are fur-covered, nocturnal animals that have very limited natural sun exposure, so study findings, while inspiring, should be interpreted cautiously. Further studies are need to further connect sun exposure with the onset of diabetes and obesity in humans.