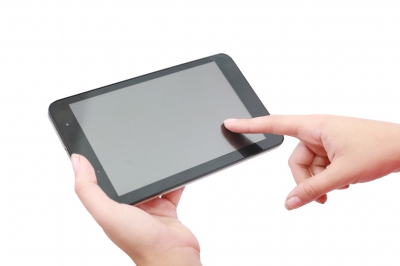 Sales of several popular tablets dropped in the last quarter of 2013 and the first quarter of 2014. Industry experts predict that a combination of market saturation, larger smartphones providing competition for tablets and a resistance to change, especially in business environments, may lead to further declining tablet sales through 2017. More expensive tablets and tablets marketed to businesses are experiencing the greatest struggle holding onto their share of the technology market.

The International Data Corporation released predictions on tablet sales at the end of 2013. Although overall tablet sales grew throughout 2013, the IDC predicted that the growth of tablet sales would slow and eventually reach the single digits by 2017. This prediction was based partially on a trend among consumers to choose larger smartphones, sometimes known as phablets, instead of using both a smartphone and a tablet. There is a distinct crossover between smartphones with large screens and smaller tablets, which continues to provide competition for tablets in the portable device marketplace.

Also, tablets have been well established in the United States since Apple released the iPad in 2010. High initial tablet sales have partially saturated the market. Many consumers regulate their tablets for use as little more than glorified e-readers and do not feel the need for regular upgrades at the same pace that smartphones are typically upgraded. As more of the people who want tablets purchase them, sales are likely to slow down.

Microsoft's Surface tablet is one tablet that has experienced a sharp decline in sales. Microsoft reported sales revenue from Surface tablets and Surface tablet accessories to be $893 million for the last quarter of 2013. Those numbers dropped to only $500 million for the first quarter of 2014, a drop of nearly 50 percent. Microsoft hopes to increase sales by marketing their tablets to businesses. Although tablets provide some advantage in the business environment, such as their portability, many business owners are reluctant to invest in new technology systems that require a large output without better predictions of how the new devices affect their productivity into the future.

The iPad is another tablet with dropping sales figures. Sales for each of the first three fiscal quarters of 2014 were down compared to the corresponding quarters in 2013. Apple has announced a new partnership with IBM to develop tablet innovations and is planning on releasing second generation versions of some of its iPad products in October 2014, including products designed specifically for commercial use. Apple hopes these new offerings can boost the company's sagging tablet sales.

The 2014 decline in tablet sales can be attributed to competition from smartphones, a lack of success in marketing tablets to businesses and a natural decrease in sales as the tablet becomes more established with consumers. Better success in the commercial arena and new tablet innovations may boost sales in the future. On the other hand, the IDC predicts a long-term slowdown in tablet sales lasting at least three years.