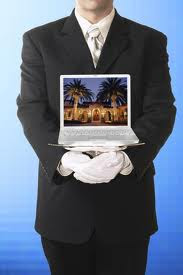 The concierge code is to satisfy every request. And concierges are the "can do" experts most upper class hotels simply can't to without. They handle some pretty bizarre requests. A sampling:

While staying at the Fairmont Hotel in San Francisco, the Swiss magnate Thomas Wolfe's asked the concierge for a Ferrari GTO. Unfazed, the concierge asked: "Any color preference, sir?" "Something dark," said Wolfe. "And I don't want to spend over $5.5 million."

A guy called and wanted to know if the concierge offered "deer pushing services." He was a hunter, and he needed someone to follow him into the woods and push the deer toward him so that he could shoot it.

A bellman had to be flown to New York to get a special set of shoes for an Arab prince who was attending a formal event.

A woman who left her baby at home, asked for a private room to breast-pump her milk. She wanted someone to freeze the milk and FedEx it to her home.

One woman asked the concierge to hire a weight-loss hypnotist for her, but first she wanted him to call a psychic to see if it would work.

Finally at the Ritz-Carlton in Cancun, a guest eager to host a private film screening on the beach didn't like the sensation of sand between his toes. Undaunted, the concierge had multiple rolls of white carpet flown in from Mexico City and spread across the beach.

Unless it's illegal or unethical, a concierge will honor virtually any request. Another unwritten rule for concierges is confidentiality—they are obliged to never reveal their client's requests.

What happened when the “anti-Uber” hired an ex-Uber CTO
news from Fast Company
Equinox gets a new CMO and AmEx acquires Resy: Marketer’s Brief
news via Latest News - AdAge