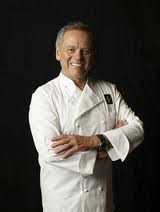 by Alex A. Kecskes
If you have dreams of becoming a world famous chef, you might take a lesson from Wolfgang Puck. The master chef and business entrepreneur created an empire that today spans three massive enterprises: Wolfgang Puck Fine Dining Group, Wolfgang Puck Catering, and Wolfgang Puck Worldwide, Inc.
How and where did Wolfgang start? His passion for cooking began as a child while helping his mother, who was a chef in Austria. He began his formal training at 14, then worked his way up to chef in some of France's finest restaurants--including Maxim's in Paris, the Hotel de Paris in Monaco, and the Michelin 3-starred L'Oustau de Baumanière in Provence.
At 24, Wolfgang left Europe for the United States and found work at the restaurant La Tour in Indianapolis. In 1975, he migrated to Los Angeles and soon captured the attention of Hollywood’s elite with his outgoing personality. He became the chef everyone was talking about and part owner of Ma Maison in West Hollywood. He next created his first flagship restaurant, Spago, which became an instant success with such signature dishes as haute cuisine pizzas topped with smoked salmon and caviar. He went on to win the prestigious James Beard Foundation Award for Outstanding Chef of the Year.
In 1997, Spago’s Beverly Hills menu featured a combination of updated Spago classics and newly conceived items. The seasonal menu also drew from Wolfgang’s favorite childhood dishes, including such Austrian specialties as Wienerschnitzel and Kaiserschmarren. In 2006, Wolfgang opened CUT, a steakhouse at Beverly Wilshire. CUT earned a prestigious Michelin star after its first year of operation.
Wolfgang’s success stems from his vibrant, dynamic personality and his ability to unite formal French techniques with Asian and California aesthetics. He became the first star chef to introduce contemporary fine dining to Los Angeles, Las Vegas and many other cities. He is an inspiration for young chefs looking to make their mark in the hospitality industry.
For an added perspective, check out this video:
Got any tips or advice on becoming a star chef? Share your comments in the section below.
Alex A. Kecskes has written hundreds of published articles on health/fitness, "green" issues, TV/film entertainment, restaurant reviews and many other topics. As a former Andy/Belding/One Show ad agency copywriter, he also writes web content, ads, brochures, sales letters, mailers and scripts for national B2B and B2C clients. Please see more of his blogs and view additional job postings on Nexxt.