The Future is Here Now 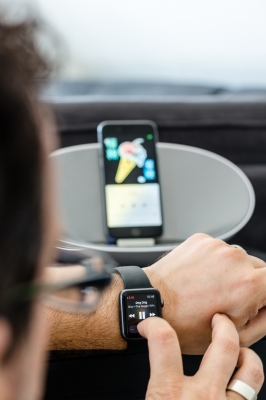 From the 1920s through the 1940s, futurists attempted to glimpse into what mankind may invent by the year 2000. People imagined colonies on the moon and Mars, future technology such as robots, and increased mobility thanks to portable jet packs. Many of the concepts from nearly 100 years ago have actually come to pass, as of 2015.

A lot of the future technology envisioned before World War II involved robots, computers and advanced transportation systems. Although futurists of that time could not explain how everything worked, they knew that physical principles may allow engineers to create fantastic constructions. Instead of lightsabers, warp speed and huge spaceships, people thought of ways they could improve life on Earth.

In 1940, Sparko the robotic dog became a fad. The metal dog used internal gears to move clumsily around a floor or tabletop. As of 2015, children can control a miniature mock-up of BB-8, the lovable, soccer-ball sized robot from "Star Wars: The Force Awakens." The power behind this toy includes a smartphone, a device that has enough computational power to put 10 IBM supercomputers from 1997 to shame. This future technology exceeds the imaginations of those who invented Sparko. Who knew that a small robot would use a phone as a remote control? Even better, BB-8 doesn't bark or leave behind small batteries for its owner to clean up.

Future technology always envisions faster and better ways for humans to travel. One such invention, the jet pack, arrived in the 1960s and 1970s. A new way to fly emerged thanks to two daredevils who have very cool videos showing two jet-pack clad men soaring high above Dubai. The trick is to have a wing-like backpack to help steer, so the inventors fly like Superman or the Rocketeer. In 2016, someone can spend $150,000 to purchase the Martin Jetpack, the world's first commercially available model. The day may yet come when businesspeople may start to commute to work with a jet pack.

"The Jetsons" showed several future technology concepts, such as robot maids, talking dogs and flying cars. Although they're not legal in the United States, flying automobiles have been around for several years. Massachusetts-based Terrafugia led the way in 2010 with its Transition vehicle, a small plan that allows pilots to fold up its wings and travel on roads. Consumers could purchase one for around $200,000, and commuters can fly the vehicle with as little as 20 hours of flight training. The difficulty is that pilots still have to land some models at traditional airports.

In 2015, two companies have planes that can take off and land vertically without a runway. Terrafugia's TF-X and the TriFan 600 from XTI can land and then drive down a city street. The TriFan 600 works just as it sounds. The plan has three powerful propellers, enclosed in a metal ring, that provide lift to get off the ground. Two of these propellers turn 90 degrees while in flight to move the plane forward.

Much of the future technology imagined 70 to 90 years ago exists today — and then some. Wireless communications devices, solar power, high-tech watches and a robot probe snapping pictures of Pluto have exceeded the wildest imaginations of generations past.

How the Hilarious, Chilling World of ‘Made For Love’ Came to Life [...
news via /Film

David Rosenberg: Some effects of the pandemic may linger, but infla...
news via Financial Post - Top...