The Rise of the Tablet for Work 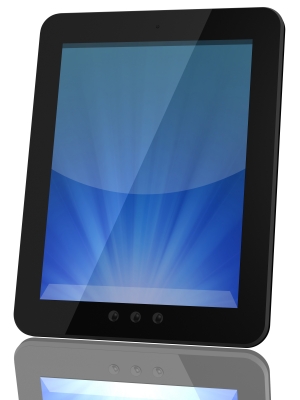 Desktops were once the dominant form of computing for professionals, but laptops gradually gained favor among the workforce. Now, tablets—originally considered consumer items—are making their way into the corporate world in the form of the business tablet. Just a few years ago, using tablets for work was rare, but a variety of factors has made them increasingly popular among workers, particularly those who travel frequently.

Tablets are much smaller and lighter than laptops, making them especially attractive to travelers who prefer to pack lightly. As an increasing number of workers turn to telecommuting, the business tablet seems preferable to relatively clunky laptops. An iPoll survey shows that 27 percent of mobile workers already use tablets for work, and that number is expected to increase—especially in light of a Cisco study showing that three out of every five workers polled feel they could be just as productive working remotely as they could be in an office. Tablet use is still dominated by younger people, but as the older generation retires and younger workers enter the workforce, business tablet use will rise.

The wide availability of business-friendly apps and accessories has also contributed to the rise in the business tablet's corporate popularity. Many workplaces use software such as Microsoft Office or programs that allow collaboration on projects from several people across many locations, and now, applications available for tablets have all the features of those programs—most with lower price tags than traditional software. Those who prefer a physical keyboard to a tablet's touchscreen can even take advantage of the wide selection of tablet-size keyboards on the market, and many cases and styluses are available to help turn a simple tablet into a viable laptop alternative.

The business tablet offers another key benefit—its comparative resistance to viruses and other threats. While malware can still infect a business tablet, it must be explicitly installed by the user. With a little bit of awareness and a commitment to installing apps only from trusted sources, users can keep tablets more secure than laptops or desktop PCs. Since viruses and malware are a constant threat, particularly to small businesses, the relative security of a tablet makes it an attractive alternative to a traditional computer.

The consumer market has embraced tablets wholeheartedly, and now the corporate world is following suit. Better apps and accessories, as well as easy portability for traveling workers, have helped make this possible. One day, the business tablet may overtake the laptop as the dominant workplace computing device, and the rise of the tablet will be complete.

Apple's bold new plan to keep the Mac relevant could actually be a ...
news from Markets

The CEO of a $67 billion bank is watching these 4 industry drivers ...
news from Markets

The Story Of The Face: The Magazine That Defined An Era
news via Refinery29