The War Against the Unemployed 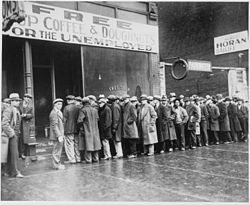 At some point during the past decade, the War on Poverty has changed and morphed into something very ugly – the War on the Poor. In the past, moving between classes was more feasible, but today, social mobility isn't as simple. With more people stuck in their respective classes, the fear of ending up homeless or at the mercy of the goodwill of friends and family has never been more real. As many formerly stable people can tell you, all it takes is a major illness, a job loss or a combination of the two to send a previously comfortable family spiraling into poverty.

A disdain for those in poverty shows itself in many different ways. One of the most common being the ostracizing of the unemployed. People who have lost their jobs due to downsizing, layoffs and even those who have been fired are finding that the people who used to be their friends no longer have much time to spend with them and when they do, the main focus of the conversation is about how to find a job. For some reason, even during this very tight job market, not being able to find a job quickly is viewed as a personal shortcoming.

Now, the state of North Carolina, where unemployment is extremely high, has made the controversial decision to cut aid given to unemployed workers. Not only have they passed legislation that cuts off the number of weeks that an unemployed worker can receive aid, it also reduces the maximum weekly benefit amount.

The decision is very unpopular and in spite of the fact that North Carolina's choice will make it ineligible to receive about $700 million in federal aid for the long term unemployed, they are standing firm with their decision. The rationale behind it is that if they reduce the amount and duration of the assistance, then people will be forced to find work or accept jobs that they had previously said “no” to. Which is, in my opinion, just ridiculous. I doubt very much that there are large groups of out of work people who are deciding to just not bother looking for a job because drawing unemployment is such a better option.

Not only does this new legislation give a stamp of approval to the rampant discrimination against the poor and/or unemployed, it also implies that the reason so many people are out of work is just plain laziness. That if people are hungry enough, they will find work. Maybe that was true a decade ago, but these days, it will only hurt the most vulnerable of families.

There was a time in our country when we were taught that collectively we were only as strong as our weakest members and that it was our duty and obligation to offer a hand up to our neighbor. We were taught that by lifting each other up, we can all achieve greatness. Maybe someone should explain this to the people in North Carolina.

Have you witnessed this sort of discrimination against the unemployed? Please share your thoughts and experiences in the comments.

Job growth lost momentum in October amid 'tug of war' between secur...
news via Financial Post - Top...
Trump Has Moved To Dismantle Criminal Justice Reform In His First 1...
news via Politics - The...