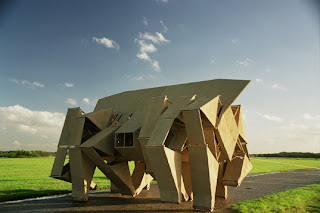 by Alex A. Kecskes
I was blown away by these creations. Dutch kinetic sculptor/engineer Theo Jansen's world famous Strandbeests are truly astounding. The wind-powered automatons look alive as they "walk" along seaside sands and country roads.
Looking like some alien space creature, Jansen's works entertain and amaze. He's been creating these artificial life forms since 1990. He notes that his skeletons have become increasingly better at surviving storms and water, adding that his ultimate goal is to put these "animals out in herds on the beaches," so they will live their own lives.
Jansen's amazing creatures are intricate, almost Rube-Goldbergish assemblies of piping, wood, and winged sails. His creatures are in a constant state or evolution—like life—and have adapted to their windy or sandy beach environments. Instead of wheels, Jansen has outfitted them with caterpillar legs, "squirrel-caging" along the sand at a pace that appears frenetic without actually covering much ground.
In the absence of wind power, Jansen has been able to breathe life into his creatures by giving them the ability to store and use air pressure. He simply uses recycled plastic bottles containing air that can be pumped up to a high pressure by the wind.
Jansen's latest creations are even smart enough to detect water and walk away from it. One multipod has the "intelligence" to anchor itself to the sand if it senses an approaching storm.
For an additional perspective, check out this video:
Alex A. Kecskes has written hundreds of published articles on health/fitness, "green" issues, TV/film entertainment, restaurant reviews and many other topics. As a former Andy/Belding/One Show ad agency copywriter, he also writes web content, ads, brochures, sales letters, mailers and scripts for national B2B and B2C clients. Please see more of his blogs and view additional job postings on Nexxt.