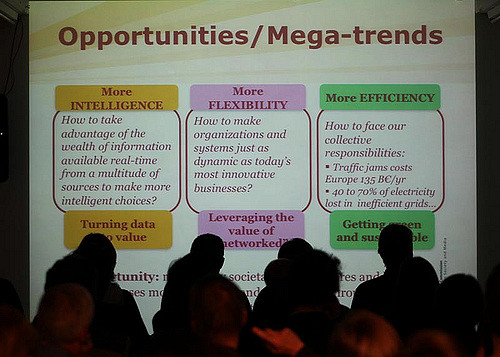 More and more devices have wireless connections, and experts collectively call these devices the Internet of Things. Like it or not, businesses, employers, workers and consumers need to be aware of IoT trends to remain competitive in various industries. These devices continue to grow in popularity, and several trends in 2016 point to a growing IoT industry.

Wearable medical devices and smartwatches are two of the most common IoT devices on the market in 2016. Research and development teams began producing many of these products in 2014, and as they got smaller, faster and better, their prices came down. Prices lowered because these IoT devices flooded the market. Some device companies may face bankruptcy in 2016, and others may merge with each other. As companies figure out which devices sell and which don't, prices should continue to lower on popular items.

IoT devices connect sensors and machines to software that collects and disseminates the information gathered by the devices. In 2016, companies must determine what to do with all of this data. Devices transmit information to a cloud computing system. While in cloud storage, software then turns the data into usable information. Methods used to turn the data into real-time operations should improve in 2016.

For example, what can a company do with someone's vital signs during a workout? Can the information go to a primary care physician? Could a dietitian use this information? How does a wearable health monitor transmit the most important information to medical health professionals? A lot of the data includes sensitive information that only certain people should be able to access. Medical devices that come under the auspices of HIPAA are examples of wearable technology that makes it easier for practitioners to monitor patients.

The software and programming behind these devices must also handle security issues. Programs can become more predictive by continuously monitoring data collection. When something goes awry, systems should adapt to the intrusion. IoT devices need to maintain the privacy of customers to avoid losing their trust.

Companies and industry leaders must note several areas of investment that may take off in 2016, with security at the forefront. Companies should add connectivity to handle the data load, such as new 5G networks produced by wireless providers. Data storage companies also stand to gain as more devices rely on cloud computing structures.

How devices talk to computer systems remains an issue. Should devices be compatible with Microsoft, iOS or Android? Apps and app developers can take IoT devices to the next level as more people program apps that serve as go-betweens. Smartphones and mobile devices must communicate with the wireless device and the place where the software stores information. As analytical systems improve, the communication among the device, computers, smartphones and apps becomes more efficient.

Experts note one major area that needs improvement in 2016 as devices become more complicated. Security must improve at all levels, particularly as companies communicate with government agencies to pinpoint possible threats. Then, companies need to talk to customers about any data breaches. Intrusions could pose safety threats for individuals, health providers and manufacturers.

Businesses can also increase their bottom line through IoT devices that enhance productivity and improve efficiency. As businesses continue to invest in IoT technology, the prices of many devices may decrease, making the technology more affordable. Once manufacturers realize the rewards of the investments, prices generally start to go down as demand rises.

Companies that manufacture and program these devices stand to gain the most in 2016 and beyond. As many as 34 billion connected devices could be in use by 2020, up from 10 billion in 2015. These devices need a lot of behind-the-scenes work to ensure they perform properly, so companies must hire tech employees to handle the coming demand.

The Internet of Things continues to go forward, with better devices hitting the market. Firms that embrace these changes in 2016 will have an advantage moving ahead. As such, the sooner companies adopt an IoT strategy, the better position these companies have in terms of lowering costs and increasing profits.

Photo Courtesy of Cea at Flickr.com