What Squirrels Know About Productivity 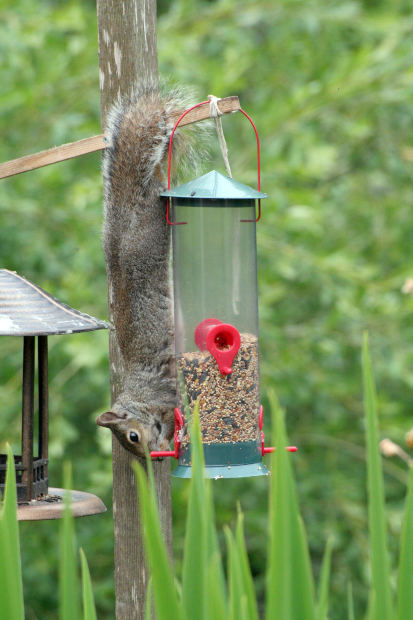 Well, spring is finally here. After a long and snowy winter, I've been so happy and excited to see the robins, a sure sign that warmer weather is on the way, outside hopping around to catch worms. It's something I look for every year, but the birds aren't the only ones who are getting an early start on food gathering.

I've been paying attention to the squirrels lately that have been running back and forth, from tree to tree, trying to gather as many of the early acorns and nuts that they can. While I was watching them, I was amazed at how productive they are. All day long, they run up trees, gather nuts and then scurry off to hide their prizes. One thing I noticed was that a certain squirrel would get a small branch with a few nuts on it and run off in one direction and then, he would repeat the process but this time, he would run in a different direction. I was so curious about his activity, I decided to do a little quick research on squirrels. What I found was surprising and I was impressed because it seems that when it comes to productivity, squirrels are masters of the art.

Here are a few things that squirrels know about being productive:

Never lose sight of your goal – One of the biggest excuses I give myself for not being as productive as possible is that I have too many things on my mind, too much stress and frankly, I'm exhausted. While it may be true, you don't see a squirrel kicking back beside a tree because he needed a personal day. Squirrels work at gathering nuts almost all day. While they are doing this, they also are trying not to be eaten by larger predators, keeping an eye on the competition, finding a mate and raising children. With all of that pressure, I'd think that they must simply snatch and grab as many nuts as they can in order to get their job done faster. Instead, they are picky about which nuts they take. You know that jerking motion squirrels do with their head when they find a nut? I was surprised to learn that they are shaking the nut and then listening to the sound it makes in order to assess the nut's quality and degree of ripeness. Their goal is to eat well all winter and no matter what else they have going on, they never lose sight of that goal.

Don't put all your nuts in one place – My research started because I wondered if squirrels hide their nuts in many different places or if they have a central horde. I was impressed to learn that not only to they keep many different stashes of food, they also remember each place they've hidden food. Scientist have done research using GPS to determine if the animals were simply hiding food and then using their sense of smell to locate hidden stashes, no matter who they belonged to, or if they actually remember. They found that a squirrel can remember most of their hiding places. Since they bury their food, the acorns they forget have the chance to grow into new trees. When you think about it, squirrels provide a valuable service by planting trees and spreading seeds.

Keep an eye out for opportunity – When a squirrel comes across a hiding place that doesn't belong to them, they aren't above digging it up and then hiding it somewhere else. They are sneaky little thieves, but they keep an eye out for new opportunities. When finding nuts isn't working out well or their aren't as many nuts to be had, squirrels will dig in garbage cans, snack on leftovers or even eat bird's eggs. Although acorns are their favorite food, they aren't above trying something new or making the most of their opportunities.

Being set in your ways comes with a huge price-tag – There are two major species of squirrel, the grey squirrel, which is typically found on the east coast where there are deciduous forest, and the red squirrel, which lives on the west coast in coniferous forests. With the lose of habitat, these two species have begun to mix into each others territories. However, they have very different ways of storing their food. Red squirrels, since they typically live in wetter forests, hide their nuts above ground in a central pile. For them, it makes sense because their goal is to keep their food dry so that it won't spoil before they have the chance to eat it. Grey squirrels, on the other hand, because they have to deal with high competition from other squirrels, birds and other animals, bury their nuts in many different places. As the two species have mixed, red squirrels are having to learn new nut management techniques. When they use their central storage method, they run a high risk of having all of their food stolen and then not being able to survive through the winter. They are learning that being stuck in a certain method can mean disaster, so they are beginning to adopt new ways to store their food.

I hope you've enjoyed this post and maybe even learned a little about squirrels and productivity. Next time your out for a walk, take a moment to admire these hard workers.

We Are Completely Obsessed With These Target Buys
news via Refinery29