What happens if the GPS goes haywire? 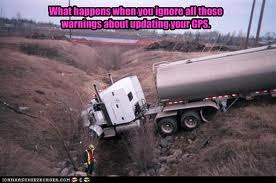 Not just the logistics business, but many aspects of our daily lives, have become dependent on satellite-based navigation and locating systems, the first and best known of which is the American Global Positioning System (GPS).

Dangerously so, says a new report from Britain's Royal Academy of Engineering.

The report, titled "Global Navigation Space Systems: reliance and vulnerabilities," notes that GPS and systems like it are vulnerable to disruption and interference from both human and natural sources and that there has been very little effort to design and build backup systems for locating and tracking materials, vehicles and information that do not depend on satellites.

Shipping companies use satellite-based positioning, navigation and tracking (PNT) systems to locate and coordinate the movement of delivery trucks, railroad freight cars, shipping containers, packages and more. Emergency services rely on them to dispatch ambulances, fire trucks, and police cars. If your local transit agency can display exactly how many minutes it will take before the next bus pulls up to your stop, it has installed a satellite PNT system in its vehicles. Governments and toll road operators are experimenting with using such systems to collect highway user fees as well.

According to the report, a solar flare could send all the satellite signals off course, with potentially disastrous consequences. Criminally minded individuals could jam or divert the signals in order to steal or hijack shipments or divert toll revenues into their own pockets.

The report recommends several strategies to reduce this threat, including the construction of alternate land and space-based systems for tracking and navigation. Two such systems, Europe's Galileo satellite positioning system and the land-based eLORAN system, are currently under development. Smart shippers and others for whom PNT systems are critical to their businesses functioning should regularly assess their vulnerability to disruption and deploy strategies to reduce that vulnerability. And finally, the report calls for a research and development program to make antennas and and receivers for satellite-based PNT systems less vulnerable to disruption.

We recommend you position yourself for a better job by tracking the opportunities on LogisticsJobSite.com.

Sandy Smith is a veteran freelance writer, editor and public relations professional who lives in Philadelphia. Besides blogging for LogisticsJobsite.com, he has written for numerous publications and websites, would be happy to do your resume, and is himself actively seeking career opportunities on Nexxt. Check out his LinkedIn profile and read his other posts on LogisticsJobSiteBlog.com.