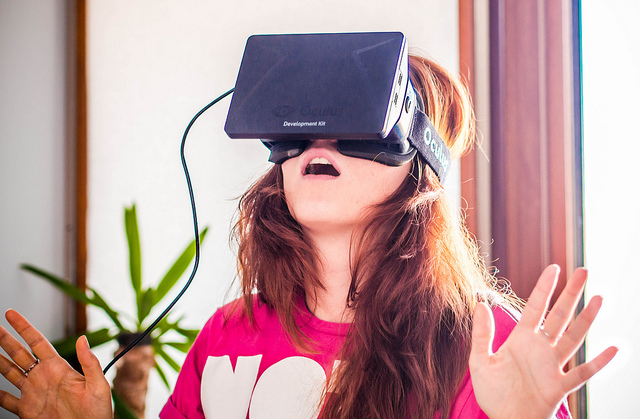 As virtual reality becomes more popular in gaming and technology cultures, peripherals such as Oculus Rift become more widely used in entertainment spaces, including TV shows like The Voice. Though virtual reality may eventually become an important tool in medical and scientific research, the budding startup Oculus VR is the first to venture into modern virtual reality.

Oculus Rift is a peripheral headset device created by Oculus VR, a company dedicated to creating a feasible venture into virtual reality. Oculus Rift was originally developed for gaming, and it uses a head-mounted display in order to show high-resolution images to each eye. Oculus’ ability to give a separate image to each eye is what creates the 3D, 100-degree field of view. Because this is how the human eye experiences the real world, it makes the experience of the virtual reality headset far more natural and reduces the risk of motion sickness.

Though the focus was originally to enhance the overall experience of gaming, the reach of Oculus Rift has grown much larger. For instance, the popular music television show "The Voice" now allows fans to judge contestants using an Oculus Rift. Fans have the chance to sit in one of the swirling chairs seen on the show, judge a blind audition and interact with fellow celebrity judges. Hollywood continues to explore other ways to use the technology, including developing feature-length films specifically designed for the Oculus Rift experience.

Virtual reality isn't just for gaming, though. Many scientific and medical researchers have found that virtual reality is an incredibly useful way to conduct certain types of research. AlloSphere, a three-story super-powered digital microscope in the California NanoSystems Institute, is an excellent example of how virtual reality can introduce new information and allow humans to see what hasn't been seen before. Scientists can now step inside AlloSphere and discover things through a 3D virtual reality. MRI scans, spinning electrons and more are all available through this new technology that is taking research to entirely new levels.

AlloSphere is developing so quickly and its systems are so enhanced that pretty soon, the supercomputer will have the ability to operate at levels near the barrier of human perception. For instance, AlloSphere runs with a resolution of 24 million pixels and has a full 512-channel sound system.

Though Oculus Rift is a key player in developing virtual reality and its role in entertainment, the technology also creates valuable research tools for doctors and scientists. Oculus VR was acquired by Facebook in March of 2014, giving the small start-up company the funds necessary to really take the Oculus Rift to the next level and compete in a wider market, leading to its appearance on popular TV shows and video games.