What’s the WEATHER got to do with it?!? 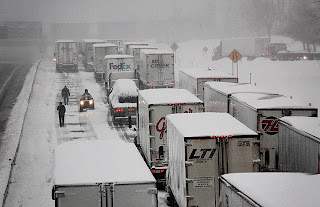 Mr. Hobbs actually ASKED “What’s the weather got to do with it?” How does a Logistics Professional explain this to a disappointed customer who is daft and detached enough to actually ask? How can you explain problems with a seasonal supply chain to a person who does not even acknowledge one exists? Perhaps ask Mr. Hobbs to simply go back to his office and visualize real hard. Then within a few days his order will magically materialize right in front of them?


While some of the Logi-Pros out there might be able to pull that one off I do not recommend that tactic. I’ve been tempted to try it with some incredibly ill-informed internal customers, but, well, I needed my job!

So did you hear the one about the January 27th snow storm in the northeast US? Maybe those of us in the supply chain could use a little help from the media on these occasions. An article on today’s MSNBC page highlights this transportation grief thusly. (Edited)

Ok, Mr. Hobbs, do you understand now why those two cases of insulated outdoor work boots you ordered from Vermont for the maintenance crew are simply not here yet? Perhaps you might also fathom that IF the company could even tell you WHERE they were, it is impossible to move them at all. Did you see that the Airports, Train routes, stations, highways, side roads, alternate truck routes and basically anything that wants to go anywhere in the northeast . . . can’t?

Great, you’re starting to get the picture!

Wouldn’t you just love to put it to him that way? Yeah, me too, but for now, YOU probably want to keep your job too!

MAYBE, If all of us supply chain magicians band together, we can gradually get our ordering public to understand that things just can’t always be instantaneous! I know, I’m not holding my breath either.

You can do this!

K. B. Elliott is a freelance writer for LogisticsJobSite.com. Working various supply positions in the Detroit area for over 30 years gives him a unique perspective on the process. His networking interests as an entrepreneur connect him with many new venture start-ups in Southeast Michigan. On the chance occurrence of spare time, you will find him building computers and airplanes, or restoring antiques. To read more of his blogs, please go to LogisticsJobSiteblog.com, and be sure to check out the postings for jobs in nearly any industry at Nexxt