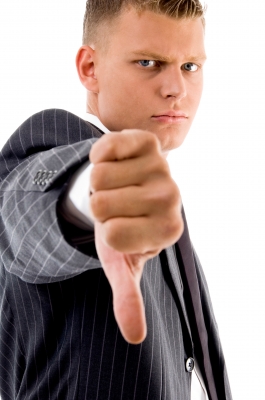 Selling a product you don't believe in is difficult. As an HR professional, the company you work for is your product, and the employees you're charged with hiring and retaining can be thought of as the public you're selling to. Hiring for a bad employer can create a crisis of conscience for thoughtful people. Learning to cope with the problem in an ethical way helps you excel in a stressful situation.

Sometimes, the employment issues at your company are the result of just a few unqualified or difficult people in senior positions. Sometimes the problem is systemic, and the company is tough to work for because of low pay, lack of benefits or official hostility to labor unions. Whether the problem lies in a single shortcoming, such as a thoughtlessly worded grievance policy, or it stretches across divisions and entails multiple drawbacks to the job, hiring for a difficult employer can make you feel as if you're tricking innocent jobseekers into making the wrong choice.

It doesn't have to feel that way, however, and there are things you can do during the hiring process that will soothe your conscience. First and foremost, don't mask the difficulties of working for a bad employer. If the company doesn't offer benefits, say so immediately and allow the new hires for whom that's a deal breaker to drop out of the process with no hard feelings. If the pay is low and likely to stay that way, pretending that a raise is just over the horizon degrades the process and leads to painful misunderstandings later. By being honest about a bad employer's blemishes right away, you filter out candidates who will feel betrayed when they learn the truth about your company's employment issues and give everyone else a fair warning before they commit.

That having been said, you shouldn't harp about what a bad employer you work for. Even a terrible workplace probably has some redeeming virtues, and bringing these out during the interview can energize you just as much as the applicants. Jobs with low pay and no benefits, for example, can be difficult to stick with. Often, however, such positions offer employees a lot of scheduling flexibility as a way of compensating for shortcomings elsewhere. There's almost always a silver lining to working for even the worst of the bad employers. As the HR manager, you owe it to your company to at least notice that lining and pass along the good word.

The most important thing you can do for a new hire is to make yourself available later on. As you well know, the job of an HR professional doesn't stop with the welcome-aboard handshake, and positioning yourself as the employees' go-between with management can make a world of difference to the people you've brought on board.

Recruiting for a bad employer can be rough. Remember to be honest with your prospects during the hiring process, but don't forget to at least mention the positive aspects of the job. Making yourself available to employees after they're hired helps smooth the relationship between management and the workforce. That continuing relationship makes working for a bad employer more tolerable for everyone.