Why Do We Fail? 5 Reasons 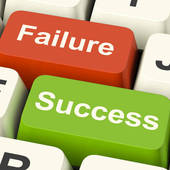 Have you ever felt like a complete failure? I have. In fact, over the past two weeks I've had a crash course in failures, both small and large. Although there are plenty of external situations that can cause failure, it seems to me that most of the time, I am the person that keeps me from succeeding. When I look at those who are high achievers, the thing they all have in common is that they truly believe that they will be successful and they take every opportunity they are offered.

Don't get me wrong, I don't want to fail. In fact, I do everything I can to avoid that, if possible, but sometimes it seems that we fail despite our best efforts. It made me wonder why that happens. Why do we fail?

Lack of belief - I used to think that it was the fear of failure that kept people from achieving their goals. Now, I think that maybe it's more about the fear of success. Actually achieving a goal is scary. It challenges you to ask "What next?". This fear keeps us from truly believing that we are able to succeed. If we don't believe it, we won't be able to do what is necessary to achieve it.

You don't think that's what "people like you" do - All too often, we think that we aren't the sort of person who do something like run a successful company or take risks. It's almost as if we have this idea of who we are and think that certain types of success are out of our reach. This isn't true and on some level, we know it, but it still can keep us stuck. This is the same belief that keeps us from really trying to reach our goals and gives us less than what we really want.

You don't want to cause trouble - I fall into this trap often. I see something that could be done better, but I don't want to be the person who makes waves or tries to cause disruptions. It's the whole "If it ain't broke, don't fix it" attitude. The truth is that anything worth accomplishing is going to involve some risk. Making a big change might mean that you have to sacrifice stability for a short time, which is scary, but in the end, it's worth it.

The fear of losing what you have - Especially when you are already established in your career, taking a risk and making a change can be terrifying. It can make us talk ourselves out of even trying to achieve anything. You have to ask yourself if you are really happy with what you have. If so, then there is no reason to try for more. But, if you suspect that there is more out there, clinging to where you're at is truly self-defeating. The reality is that things can change and you can lose everything you have in a heartbeat. Think about how many people you know who have lost their jobs and maybe even their homes over the last few years. Things change and the fear of losing what you have shouldn't stop you from trying to achieve the things you want.

Confusion over what to do next - This one is a difficult one to overcome. Sometimes, you just don't know what to do next. When this happens, don't be too hard on yourself. Relax and give yourself some time to catch your breath. Eventually, you'll see the next step. The most important thing is to never give up and keep looking for the next clue that will give you the inspiration to decide what's next.

Don't allow the fear of success to cause you to fail. Take a good, hard look at yourself and make sure that you aren't causing your own failure.

Have you ever been your own worst enemy? What do you do to overcome these self-defeating beliefs? Please share your thoughts and ideas in the comments.