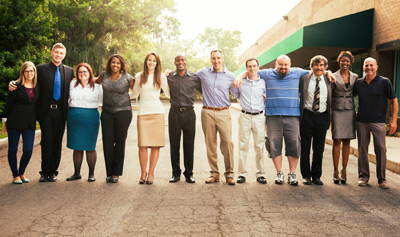 As of June 2017, economic reports indicate that more job vacancies exist than were available in the year 2000, but millions of Americans in the middle class are without work. If there are so many jobs available, why are there still so many unemployed citizens out there? Here are 6 reasons that those in the middle class can't find jobs.

1. They Don't Possess the Required Skills

Many middle-class workers don't have the job skills or experience to qualify for the vacant positions. Automation is a huge part of many modern businesses, so workers with technological skills are in high demand, and a laid-off plumber isn't likely to fare well in the technology field. This skills mismatch can be a hindrance for jobseekers and employers looking to hire. The healthcare and social services industry is also lacking in qualified workers to fill a multitude of vacant positions.

When workers lack the required skills to fulfill certain job duties, some employers simply provide training. Others, however, aren't as willing to offer the education. This keeps the middle class from getting work.

The majority of vacant positions are in South and the Midwest. It's clear that these regions lack the qualified workers necessary to fill the open jobs.

4. The Wages Are Too Low

Many middle-class workers aren't taking jobs because the pay is too low. Employers who aren't willing to increase wages often have trouble finding skilled workers to fill vacant positions. When unemployment rates were high and workers were desperately seeking positions that were in short supply, companies could get away with this mindset, but the logic doesn't apply when there are lots of vacant positions out there for workers to consider.

In addition to higher pay, jobseekers also want to find positions with companies that offer excellent benefits packages. Businesses that aren't ready to increase their wages aren't likely to want to pay more for employee benefits either.

There are 6.7 million unemployed Americans, and there are approximately 6 million vacant positions. As of June 2017, however, America's unemployment rate is only 4.3 percent, indicating that the country is close to achieving full employment. This means that nearly every citizen who wants a job has a job. The 4.3 percent can be chalked up to workers who are cyclically unemployed, whether they're laid off, seasonal workers or recently quit a job.

With so many middle-class Americans out of work, it's important to find out why these individuals can't find jobs. What's even more puzzling is that, as of June 2017, some six million job openings exist. So why is it that these middle-class workers are still unable to find work? This list of 6 reasons provides the answers.