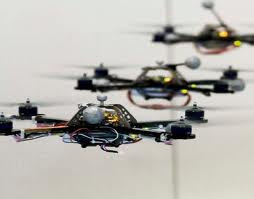 by Alex A. Kecskes
Who will build the next generation of skyscrapers? Will construction crews rise to the challenge and take materials into lofty stratospheric heights? Or will robots answer the call to streamline the task—as they have with such precision in the automotive industry. If you’re a young engineer looking for a job with a future, you might consider learning as much as you can about flying robotics.
Underscoring the importance of robotics in construction, flying quadrocopters recently built a 20-foot-tall tower at a museum in France. Made of 1,500 polystyrene blocks, the tower represents a model of a futuristic 2,000-foot tall "vertical village" capable of housing as many as 30,000 people.
Each quadrocopter was equipped with custom electronics and onboard sensors, which made it easy to precisely control each copter. This allowed for pre-programmed flight paths, such as arcs and spirals, and it prevented the copters from flying into each other. The same technology is also used for automating routine take-offs, landings and vehicle calibration and charging. Rapid flights kept things on schedule and cut down on construction delays.
The flying constructor robots provide a glimpse in the future of building construction. They’ve already essentially taken over the building of automobiles in factories around the world. Why not the next-generation of skyscrapers? Once architects finish a blueprint for a building (on CAD systems), computers and robots will take over, interpreting the designs and activating robotic copters to finish construction.
You can see the first job completed by a system of “flying machines” at the "Flight Assembled Architecture" exhibit at the FRAC Center Orleans.
For an added perspective, check out this video:
Got any thoughts on flying robotics? Will robots take over building construction? Include your comments in the section below.
Alex A. Kecskes has written hundreds of published articles on health/fitness, "green" issues, TV/film entertainment, restaurant reviews and many other topics. As a former Andy/Belding/One Show ad agency copywriter, he also writes web content, ads, brochures, sales letters, mailers and scripts for national B2B and B2C clients. Please see more of his blogs and view additional job postings on Nexxt.