Workin' on the railroad: Another option for people who want to go places 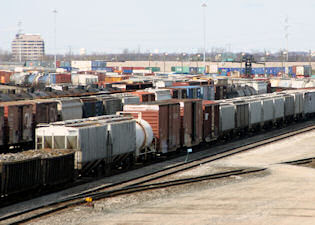 With thousands of Baby Boomers nearing the age where they can cash in their Federal railroad retirement benefits, this is a good time for people intersted in the transportation side of logistics to consider railroad work as a career.
After decades of retrenchment and consolidation, freight railroads are now in better shape than they have been in years and play a key role in the nation's transportation network. Hundreds of millions of tons of goods, from raw materials to finished products, move each year over America's freight railroads, which operate 143,361 miles of track. (Passenger railroads and local transit systems - light rail and subway lines - account for the rest of the roughly 233,000 total miles of track in the United States.)
Even though automation and technological improvements have eliminated many railroad job categories over the years, railroads continue to employ a large number of people - 130,500 in 2008, according to the Bureau of Labor Statistics. The overwhelming majority of railroad employees are locomotive engineers and operators (51,100 in 2008) and conductors and yardmasters (41,300 in 2008).
Conductor jobs are among the highest-paying jobs in railroading, an industry with average wages well above the national average. They require more mental than physical prowess, as conductors must keep track of where train cars are headed and the composition of their individual trains. They also play a key role in the assembling of trains in railroad classification yards. Both conductors and engineers must undergo extensive training and meet Federal licensing standards. The downside: Conductors are on call round the clock, can receive as little as 90 minutes' notice of an assignment, and regularly put in long shifts, though Federal regulations mandate rest breaks at set intervals.
Most railroad conductors and engineers work their way up through the ranks after starting out as brake, signal or switch operators. These jobs generally require more physical labor than conductor and engineer positions do.
For more information about the employment outlook for rail transportation, consult the Bureau of Labor Statistics' Occupational Outlook Handbook. To apply for jobs in rail transportation, consult the listings on LogisticsJobSite.com.