Workplace Competition is Good as Long as it is Friendly 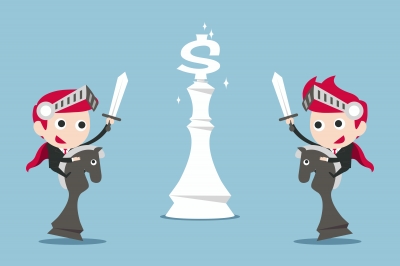 There's nothing wrong with a little bit of workplace competition as long as it doesn't get out of control and cause negative feelings and stress. The key is to focus on individual performance rather than a rival's, and set goals that motivate intrinsically, not extrinsically. While most people love extra benefits and cash, it's a sense of meaningfulness, progress, choice and accomplishment that have the most effect on long-term change.

When people feel they are part of a team and have common goals for the company mission, it can build a culture of healthy workplace competition. This involves setting goals according to benchmarks designated by team members or management, or some other type of metric. When these goals are reached, members of the team are happy for each other and encourage each other. They also see progress as an accomplishment. Keeping score doesn't have to be about negativity and jealousy, it can serve as the benchmark that teams or the individuals themselves have to reach to help the company be successful.

Workplace competition should be about a constant state of improvement, where the similarly skilled and motivated employees foster an environment that breeds improvement and self-awareness. If this kind of culture doesn't already exist, it may be up to senior management to think of ways to encourage this type of environment through coaching and real-time feedback.

Healthy workplace competition that inspires employees to work harder, accomplish more and grow professionally is the desired result, but what if instead of the competition motivating employees, it causes stress and hurts job performance? This kind of competition focuses on winning and being the best. Employees may feel the need to constantly compare themselves to others who are doing well and find themselves coming up short. They may also decide it's not worth it to continue with this toxic rivalry and look elsewhere for a job, resulting in even more lost productivity as the company tries to recruit new talented, skilled, motivated workers to fill the void.

Businesses can avoid this loss of talent by promoting balance in the workplace. Management can encourage employees to learn new skills and set goals and act as a referee of sorts if the competitiveness gets out of hand. Workplace competition that is a challenge rather than an outright competition is also more likely to generate feelings of motivation rather than jealousy.

Workplace competition that focuses on learning new skills, having fun, supporting a team and rising to a challenge is motivating and fosters a healthy office culture. Avoid a toxic atmosphere and negative feelings by finding common ground and viewing competition as a way to advance the company's mission rather than bringing others down.