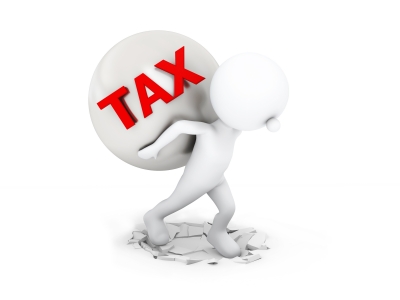 With tax season in full swing, now is a good time to start helping your clients plan for the future. Your tax rate has a lot to do with where you live, so if any of your clients are thinking about relocating for job opportunities or retirement, you should tell them about the different tax rates in each state. Some states have no income tax, while others have high income and sales tax rates. Giving clients this information now could help a few of them avoid costly moves in 2014 and beyond.

In January 2014, the Fiscal Times released a list of the top ten worst states for taxes. New York, New Jersey, and California took the top three spots. New York has a relatively low sales tax rate of 4 percent, but the highest income tax in the state tops out at 8.82 percent. Property taxes are also $2,280 per capita. The top income tax rate in New Jersey is very similar to that of New York, but the state's sales tax rate is 7 percent. New Jersey also has a smaller tax base than New York, putting more of a burden on residents. California's top income tax rate is 13.3 percent—one of the highest in the United States. The state also levies an alternative minimum tax on individual and corporate taxpayers.

The next three states on the list of the worst states for taxes might come as a surprise to many Americans. Minnesota landed the fourth spot on the list due to an increase in its top income tax rate. Corporate income taxes are also high in Minnesota compared to other states, making businesses more likely to shy away from moving their operations there. Rhode Island, number five on the list, has a relatively low top income tax rate of 5.99 percent. However, "Kiplinger Magazine" ranked the state as the worst in the nation for retirees because Rhode Island taxes income from pensions, Social Security benefits, and other types of retirement income. Providence, Rhode Island, also has one of the highest tax rates in the country.

Vermont is number six on the list due to its high property taxes and relatively high corporate, sales, and individual income tax rates. Although North Carolina is seventh on the list right now, that is likely to change in the near future. The state has new tax rules regarding individual income taxes, estate taxes, and corporate income taxes. Individual taxpayers will pay a flat rate of 5.8 percent in 2014. The tax rate will increase to 5.75 percent in 2014; lawmakers say the new tax rates were introduced to spur economic growth.

Wisconsin, Connecticut, and Maryland are in the final three spots on the list. Wisconsin made the list because of its relatively high income tax rate and alternative minimum tax for individual taxpayers. Connecticut has the second-highest property taxes in the country as well as relatively high income and sales tax rates. Maryland lawmakers are considering a proposal to lower corporate income taxes to 6 percent, but the current rate is 8.25 percent. The state also has a sales tax of 6 percent and a top income tax rate of 5.75 percent.

Your clients count on you for up-to-date information about tax strategy and legal ways to reduce tax liability. Present this information about tax rates to anyone who is thinking about accepting a job offer in another state or moving out of state for retirement. The wrong tax rate could result in a loss of thousands—or even millions—of dollars.