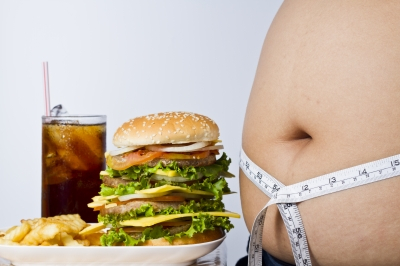 Nutritionists, dietitians and healthcare professionals have been warning their patients about the risks of overeating for decades. And while the increased risks of heart disease and diabetes have figured prominently in these warnings, many patients seem unaware of the many other ways obesity can damage their health.
Tipping the scale above one’s recommended BMI can increase the severity of certain cancers, arthritis, sleep apnea, and infertility. Yet according to a recent poll by the Associated Press-NORC Center for Public Affairs Research, few Americans are aware of these added risks. While 70 percent know that being overweight can increase one’s risk of heart disease and diabetes, only 7 percent were aware of obesity’s increased cancer risk. And just 15 percent knew that obesity can contribute to arthritis, which in turn, reduces one's ability to exercise and thus gain even more weight. In fact, nearly 25 percent believe a person can be substantially overweight and still healthy.
"People are often shocked to hear how far-reaching the effects of obesity are," said Jennifer Dimitriou, a bariatric dietitian at New York's Montefiore Medical Center. An alarming number of people were unaware that obesity can increase the risk of developing cancers of the colon, breast, prostate and uterus. It’s also harder to spot tumors early and to treat them in obese patients. Few knew of obesity's connection to high blood pressure, high cholesterol and strokes. A scant 5 percent were aware of the respiratory problems caused by obesity, including the increased risk of sleep apnea and asthma.
Many women were totally unaware that being too heavy can lead to infertility. A Nurses' Health Study, which followed 114,000 middle-age women for 14 years, revealed that infertility was lowest in women with BMIs between 20 and 24, and increased with lower and higher BMIs. This study suggests that 25 percent of ovulatory infertility in the U.S. may be linked to obesity. During pregnancy, obesity increases the risk of early and late miscarriage, gestational diabetes, preeclampsia, and complications during labor and delivery.
The more patients understand about obesity and the many problems it can cause, the better. "Most people want to become healthier. It's the know-how, and understanding what the consequences are," said Dimitriou.
According to the AP-NORC Center survey, less than half indicated they had discussed the health risks of obesity with a doctor and about half thought their weight was just about right. Nearly 1 in 8 parents thought their child was overweight. This, in light of the fact that government figures show two-thirds of U.S. adults, and one-third of children and teens, are either overweight or obese.
Nutritionists, dietitians and health care professionals need to become increasingly proactive in warning their patients about the “other” risks of being both obese and even slightly overweight.
Image courtesy of Surachai/FreeDigitalPhotos.net