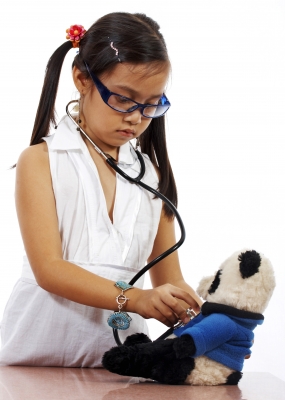 Debbie Sterling's newest engineering-themed toy is a GoldieBlox action figure that allows girls to build a toy-sized zipline for the golden-haired genius to travel to hard-to-reach locations. The idea is to get girls interested in science, technology, engineering and math, or STEM, at an early age instead of finding generic Barbie dolls in the toy section.

The newest advertisement for the GoldieBlox action figure is a take on Apple's "1984" commercial. Instead of breaking down computers, a hammer-wielding girl in overalls smashes the doll-making device as she frees girls from the bonds of typical girls' toys.

The newest toy arrives just in time for the winter holiday shopping season. The GoldieBlox action figure teaches girls spatial reasoning, problem solving skills and the physics of suspension. The toy also teaches concepts such as simple machines with pulleys, friction and how gravity works to move objects.

GoldieBlox, girl inventor, includes a line of storybooks and kits that teach girls how to build levers, pulleys, hand-cranked machines and spinning toys. Kits include building a small parade float, spinning toy, survival kit, movie machine and dunk tank. However, none of these kits come with a posable GoldieBlox action figure. The figure can interact with other GoldieBlox kits and not just the zipline.

GoldieBlox is the brainchild of Debbie Sterling, a former Stanford University engineering student, who wanted to get girls' toys away from typical selections in the "pink aisle" of stores. Sterling wants to encourage girls to think about STEM concepts at an early age instead of makeup, fashion, raising babies and cooking. Young children interested in STEM concepts show aptitudes towards these types of careers later in life, and GoldieBlox toys pique the interest of girls before they can get into an actual laboratory setting.

The GoldieBlox action figure makes a much larger debut in the 2014 Macy's Thanksgiving Day Parade in New York. The move follows Sterling's ad grab during the 2014 Super Bowl when GoldieBlox became the first small business to have such a television commercial.

Goldieblox follows recent moves by large toy companies such as Nerf and LEGO. Nerf created its Rebelle line of bows and arrows to mimic the success of "Hunger Games" in movie theaters. Most Nerf commercials feature boys shooting toy guns at each other. LEGO created LEGO Friends kits so girls can build sets for jungle adventures, ranches, lemonade stands, shopping malls and beach resorts. LEGO encourages spatial reasoning and creativity with its mix-and-match style of building with interlocking plastic blocks that are limited only by someone's imagination.

The new GoldieBlox action figure continues Sterling's successful line of engineering-based toys for girls that she started two years ago. Think of GoldieBlox as Bob the Builder for girls; so look for future possibilities such as expansion into a cartoon show and DVDs to go along with toys and books.