Chromebook Beats Apple in US Classrooms 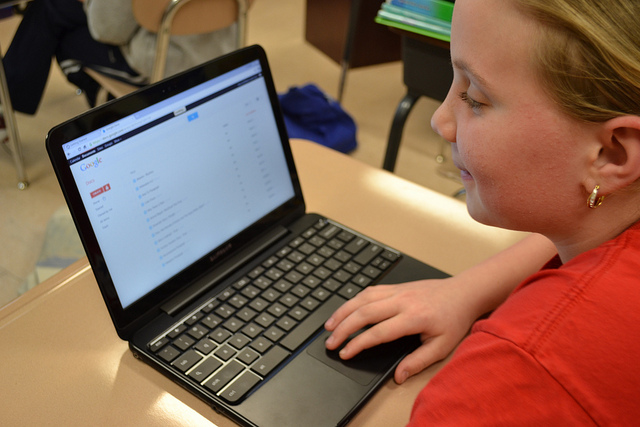 For years, iPads have been the most popular classroom technology. However, during the third quarter of 2014, more Chromebooks were shipped to schools in the United States than any other device. This statistic is another example of Google gaining ground in markets traditionally cornered by Apple.

During the third quarter of 2014, 715,500 Chromebooks were shipped to U.S. schools, compared to only 702,000 iPads. Just two years ago, Chromebooks were virtually unknown as a form of classroom technology, but now they represent a quarter of the entire market.

Although Apple promised that the iPad would be a useful teaching tool, schools have not found the tablets as functional as expected. In contrast, the Chromebook features useful classroom technology, including the Google Apps for Education Suite. This cloud-based suite of software is free for schools to use, comes with 24/7 support and doesn't use ads or data harvesting.

Microsoft, which is the third big player in the classroom technology market, also offers a cloud-based educational software solution. However, although Office 365 is free for students to use, schools have to pay, which makes this service less attractive for many budget-conscious schools than the free Google Apps for Education. Apple also offers educational productivity apps, including Pages and Numbers, but it has not been as popular as the Microsoft and Google alternatives.

The size of the initial investment that schools must make in classroom technology is also an important consideration. Whereas a 2013 iPad Air costs $379 for a school to buy with educational discounts, the Google Chromebook starts at just $199. Chromebooks also offer better functionality according to many teachers, as each one has an integrated keyboard. The presence of a keyboard is important for older children who need to type for significant periods of time.

Forbes contributor Anthony Wing Kosner also argues that Chromebooks are a more appropriate form of classroom technology as they do not share the gaming reputation of the iPad. Kids already associate tablets with media consumption and gaming rather than with learning. The iTunes store, which is integrated into the iPad, also heavily promotes games rather than more serious apps. There is a real danger that introducing iPads into the classroom could lead to more distractions for kids, which overshadow the learning opportunities that this classroom technology has to offer.

The battle to dominate the classroom technology market is heating up between Apple and Google. For the first time, the Chromebook has become the most popular teaching tool in U.S. classrooms, stealing the top spot from the iPad during the third quarter of 2014. With fierce competition from both Apple and Microsoft, Google needs to keep innovating to stay at the head of the classroom technology market.