Creating a Workplace That Embraces Diversity 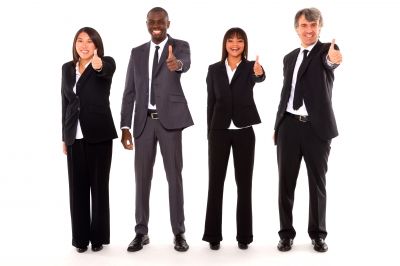 Workplace diversity continues to be a buzzword among managers and recruiters. People from different backgrounds help companies maintain strong ties and interactions with customers from diverse socioeconomic walks of life. As such, businesses can benefit from more diversity and inclusion.

Talent Management relates the story of the U.S. military's internment of Japanese Americans during World War II. The military governor of Hawaii, Delos Emmons, was ordered to incarcerate all citizens of Japanese descent. Yet, Emmons' time among the ordinary, everyday citizens of his home led him to refuse the order. Instead, local Japanese Americans helped rebuild Pearl Harbor in record time. If Emmons had not recognized the value of another culture, or understood the basic principles of diversity and inclusion within civilized cultures, the Pacific Theatre of Operations might have turned out differently during World War II.

One of the reasons workplace diversity remains important is because you never know when someone may become useful to your organization thanks to a different perspective. Because the Japanese Americans were so numerous in Hawaii, their huge labor pool obviated the need to import citizens from mainland America. Hiring locals saved time, money and effort. Likewise, drawing from a labor pool from within your company's community means your firm has people who can relate to their friends, neighbors and colleagues whom they serve.

Instead of creating social distance between someone, companies should foster environments of workplace diversity where no one is a stranger at a diverse workplace. Rotate desk assignments periodically to put different people in close proximity to each other. Encourage employee interaction at weekly or monthly gatherings. Hire a diverse set of well-qualified candidates. Try to treat everyone with the same magnanimity at the office, no matter what a person's social background.

Workplace diversity helps businesses in many ways. One of the most important aspects of diversity stems from hiring a more creative workforce that leads to better problem solving. This creativity also leads to innovation, and innovation leads to higher profits. A 2011 study conducted by Forbes indicates 85 percent of companies with annual revenues higher than $500 million agreed workplace diversity is crucial to forward-thinking ideas and innovation.

Diverse companies make more revenue because employees can relate to more people. Further, diverse firms also drive economic growth because a wide range of people need jobs within the American labor pool. Companies that hire the best, and most diverse, candidates often become industry leaders due to the economic benefits of onboarding people from various backgrounds.

Workplace diversity remains a good economic principle and not just a catchphrase for businesses to put in mission statements. Idealize your company's diversity by embracing what the wealthiest companies already know. A more diverse workplace creates better customer service, more innovation and imagination while bringing in more revenue and profits.