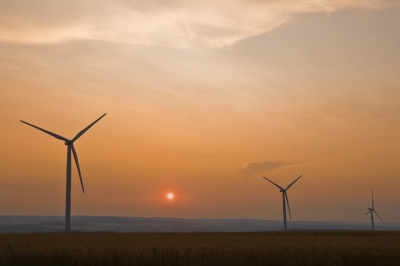 Large-scale wind energy is one of those really great ideas that's historically had trouble reaching its full potential. Entrenched interests in the energy industry have all sorts of motivations to continue developing fossil fuel resources while neglecting renewable alternatives. Smaller operators have been deterred by the demanding initial outlay of development capital. Over the last several years, it's become apparent that what the wind energy industry is going to need is outside development by an organization with very deep pockets but without the existing entanglements in oil and coal that have held back traditional energy companies. Enter Google.

Through its philanthropic wing, Google.org, the tech giant has recently embarked on a policy of making large acquisitions in renewable energy infrastructure. The most recent of these has been the purchase of the entire output of the Happy Hereford wind farm, near Amarillo, Texas. The deal, which was announced on September 17, positions Google as the sole consumer of wind energy generated by the massive 240 MW farm.

While the laws governing local utilities prohibit Google from turning the entire output of the farm to running its Mayes County, OK, data center, the arrangement Google has worked out with the state has the potential to enhance the profitability of the deal, perhaps driving future large acquisitions in wind energy. Under the arrangement, Google will purchase 100 percent of the wind energy from the farm, offer it for sale on the local Oklahoma energy market, and then purchase what it needs for the data center from itself. Ideally, any slack capacity can then be offered to residential and business customers in the area to defray the cost and reduce strain on the local coal-fired grid.

This deal stems from Google's commitment to developing wind energy, along with solar and other renewables, with an eye toward driving down the per-unit cost of wind energy until it's competitive with coal. Google has so far refrained from asking the federal government for subsidies equal to the approximately $100 billion per year that coal has been the beneficiary of. The agreement to buy the entire output of the Happy Hereford wind energy farm pushes Google's energy resale profile to an impressive 570 MW, enough to run 170,000 American homes. The capital invested so far is hovering near $1 billion.

It would seem that wind energy has found its angel investor. Google is a very large, highly diversified tech giant that has made a public commitment to developing alternative energy sources. Huge investments, along with the promise of what amounts to a dedicated selling agent for output, have the potential to encourage more small-scale and local attempts at developing wind energy as the new standard for American power. The Happy Hereford site is expected to be in full production by the end of 2014.

Americans got richer than ever during the pandemic, but Canadians h...
news via Financial Post - RSS...

Cheers to 2017! We Rounded Up Our Fave Moments of the Past Year
news via All Articles