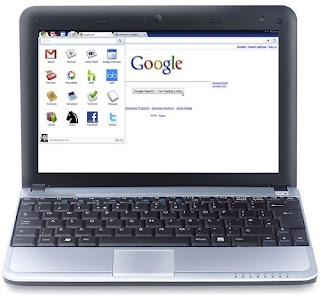 Earlier this week, Google announced that their new Chromebook is ready to be released and is scheduled to hit retailers on June 15th. For real this time. Many people in the tech industry have considered the Chromebook to be an idea that was discarded after Google announced the launch, then changed their mind back in December. They didn't scrap the idea though, they just made it a little better.
The Chromebook is a laptop that claims to be always on, have an all-day battery. It runs the Chrome OS and uses the Google Cloud to store your data. This means that you can access your data from anywhere. For example, if you use the Chromebook at home, you can easily access your cloud from your work computer in order to get to a file you need.
It seems that Google has taken a page from Apple's book and focused more on the experience than on the hardware in this release. The laptop is a barebones computer, but the selling point is the Chrome interaction rather than what's under the hood.
That isn't to say that the hardware is junk. The Chromebook will offer built in security, and even has multiple connectivity options. It is running an Intel dual core CPU and has external file storage options. Which means you can plug in a camera, flash drive or SD card in order to access files on your other devices.
Of course, one of the problems that many people anticipate with this sort of device is that it has to be connected to the internet in order to access the files in the cloud. While this is mostly true, there are offline versions of many of the Google products, including Gmail, Calendar and Docs.
Google has partnered with Samsung and Acer to provide the hardware for the Chromebook and they are using Verizon to provide 3G data connectivity. The Samsung version of the Chromebook looks very impressive, it touts an 8 second boot time, 8 hours of battery and a 12 inch screen. While the Acer version is similar, it only has a 6.5 hour battery life and the screen is 11.6 inches.
The prices for the Chromebook will vary depending on the features you want. The Samsung version runs $425 for wi-fi only, and $499 for the 3G model, although you will need data service. The Acer version is a cheaper alternative, and so far they are only saying that the Chromebook will cost $349 and up.
It will be interesting to see what the reaction will be when the Chromebook is released. I know that I am really looking forward to it. Although I already have a laptop I use for work, I think the idea of an affordable, easily portable computer that keeps everything in the cloud is genius. I use Google for almost all of my email, documents and so on, and the ability to access them easily from anywhere is exciting.
What do you think about Google's Chromebook? Is it something you would buy? Let me know in the comments.
By Melissa Kennedy- Melissa is a 9 year blog veteran and a freelance writer for TechCareersBlog. Along with helping others find the job of their dreams, she enjoys computer geekery, raising a teenager, supporting her local library, writing about herself in the third person and working on her next novel.