Google Sparks Up Production on its Self-Driving Cars 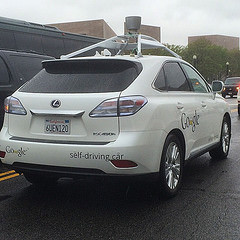 A future with self-driving cars is closer to reality. Google announced that a test fleet of 150 vehicles started production at a facility in Detroit, a move that culminates six years of research, several design improvements and more than 700,000 miles of testing.

Google's driverless cars look like small, podlike, two-person vehicles with sensors mounted to the top of the roof. The Detroit facility makes more advanced models of the design revealed in 2014. This newer concept car includes working headlights and other items needed to make a fully functional vehicle. The goal is to have some self-driving cars available for sale within five years.

The current fleet will undergo testing sometime in the spring of 2015 in California, one of the few states where self-driving cars are street-legal. Staffers from California and Detroit work on the production of the cars, with a combination of Google's tech-savvy engineers and Detroit's automaking capabilities. The marriage between a Silicon Valley giant and a Detroit car production facility may become more common in the near future. Increasingly, cars have more and more computer technology to assist drivers. This kind of partnership benefits both of these businesses since they have much to gain from advancements in automated vehicles.

Production of Google's driverless cars is the next logical step in the company's push to further the technology. Before, the tech giant outfitted already-made cars with sensor suites, computers and radar technology to test the concept of self-driving cars. Now, engineers in California and Detroit can build sensing equipment and computerized parts right into the vehicles themselves. Any updates to the cars can be replaced easily as newer sensing equipment becomes commercially viable.

Most of the technology behind the vehicle has been a closely guarded secret. Google plans to use QR codes to help self-driving cars find parking spots. The vehicle will scan a code on the pavement to download information as to what parking spaces are empty in the facility and how to get to that area. This same QR, or quick response, code technology allows smartphones to scan and download product information in retail stores and from websites.

Google's new vehicles have big-city consumers in mind. The pod design touts space saving on city streets, in parking garages and in close quarters. Drivers in American cities such as New York, Los Angeles, Atlanta, Houston and Chicago stand to benefit the most from these cars, especially during long commutes and crowded rush hours. Countries such as India and China, both with huge populations, also gain from smaller vehicles that drive themselves.

Another important aspect of Google's cars revolves around small, electric vehicles without a gas tank. Not only do these vehicles drive you where you want to go, but they save gasoline and carbon emissions too.

Self-driving cars are no longer fantastic notions from science-fiction movies. This game-changing technology can reduce accidents, save lives and even help reduce humanity's carbon footprint. Improving the quality of life for everyone is the ultimate goal, especially when these cars are proven safe and become widely accepted.

Photo courtesy of cdorobek at Flickr.com