Government Cracking Down on eCigarettes 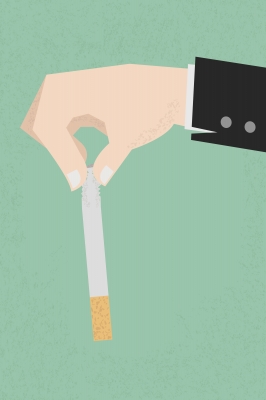 The U.S. Food and Drug Administration has finally taken a hand in regulating the sale of electronic cigarettes and, surprisingly, many in the industry couldn't be happier. Usually, FDA regulations are greeted with wariness by manufacturers, but the new rules, which have the potential to affect e-cigarette sales nationwide, are being taken as an encouraging partnership between regulators and important players in the relatively young market.

Electronic cigarettes are fairly new to the market. In the few years they've been available to domestic consumers, e-cigarettes have existed in a very gray area where few FDA regulations have existed to ensure that quality and safety standards are upheld. This has led to tension between small manufacturers and large producers of electronic cigarettes, as large players have argued that quality control among smaller makers is anything but certain. Smaller companies, however, have alleged that concerns over safety are a red herring meant to restrict their share of the burgeoning market. Guidance from the FDA, which regulates many consumer products and can even impose serious fines for breach of its rules, has been looked to as a solution for this conflict.

At issue is the electronic cigarettes themselves, and the rules under which they can be marketed and sold around the country. Electronic cigarettes differ from traditional tobacco products in that they vaporize a dose of nicotine electronically and deliver it via breathable steam, dispensing with the burning vegetable matter that coats smokers' lungs with carcinogenic tar. It should be noted that no cigarette can ever be considered truly safe, as their essential purpose is always to deliver a dose of nicotine to the smoker's bloodstream, and the nicotine itself is responsible for much of the cardiovascular harm that smokers experience.

Safety has been on the mind of Ray Story of the Tobacco Vapor Electronic Cigarette Association, an industry trade group. According to Story, the new FDA regulations, which restrict marketing and vending machine sales as well as imposing strict reporting requirements, could be restrictive but will likely lead to an overall safer product that will help bolster electronic cigarettes' image as a viable alternative to smoking. It is just as likely that Story's group is grateful that the new FDA regulations abstain from regulating the product as tightly as traditional tobacco products. Indeed, late in 2013, the Los Angeles City Council voted unanimously to restrict the sale of flavored solution and the offering of free samples--measures in line with standard tobacco restrictions that the FDA regulations might prevent from spreading outside Los Angeles, a move that would almost certainly hurt e-cigarette sales elsewhere.

This move by the FDA has been long in coming. Prior to adopting the new regulations, the agency had been promising pressure groups action on these products for at least three years. As local governments began to approach the issue without federal guidance, pressure mounted on the industry to take an active hand in crafting FDA regulations that balance enthusiasm for a new product with public safety.