Keep Politics Out of the Interview 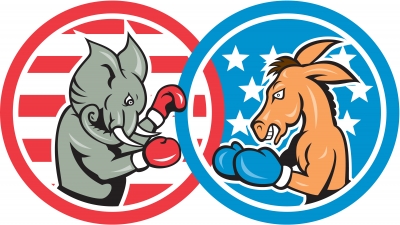 Politics are a big conversation topic in endless social situations, but one place in which they don't belong is a job interview. Although interviewers can't legally ask you about your political stance, many are unaware of this and bring up the topic anyway. This can put you in an awkward situation. Before stepping into your next job interview, learn everything you need to know in case your interviewer starts talking politics.

When Politics Invade the Conversation

Politics can enter the interview in a number of ways. Interviewers rarely ask about politics as part of the job interview itself, instead using the subject as an icebreaker for some light conversation with direct questions such as "Who are you voting for?" At other times, an interviewer might use an indirect approach, bringing up political issues that may affect the company or industry to better understand your political stance. Some interviewers may even try baiting, using some controversial or emotionally charged statement to try to get a reaction from you.

When the interviewer starts talking politics, the most important thing is to keep your cool, with your body language, volume and reactions as neutral as possible. Use nonpartisan reactions such as "That's interesting" or "I never thought of it that way" to any political statements. Next, with a friendly smile, start shifting to a more relevant topic. One option is to use something the interviewer says to transition to another topic. For instance, if he is trying to start a discussion about a presidential candidate, start talking about what attributes you think make a good leader. Another option is to make a nonpartisan joke to lightheartedly signal you're ready to move on with the job interview.

If the interviewer seems unwilling to give up the subject, stand firm. Politely state you believe politics aren't an appropriate job interview topic, you'd like to move on, or you don't believe you should be having such a discussion as it isn't legal.

Whether it's saying you don't have an opinion about a political topic or choosing to agree with whatever the interviewer says, think twice before giving a dishonest response. You should never be so intimidated by an interviewer that you feel the need to lie to stay on his good side. On the other hand, you should also avoid being drawn into a political dialogue even if you genuinely agree with interviewer's stance. Instead, work on steering the conversation toward more appropriate interview topics.

Political discussions in the interview room can catch you off guard, so don't go in unprepared. When politics come up in a job interview, react politely but firmly, reminding the interviewer what you really came to discuss: your qualifications for the job.

Photo courtesy of Vectorolie at FreeDigitalPhotos.net