Myth or Reality? Exploring the Truths Behind Gender Pay Disparity 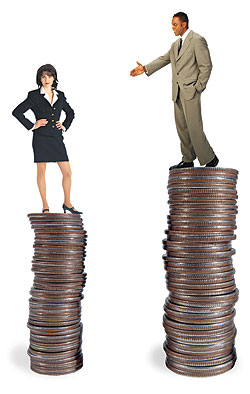 The gender pay gap made headlines during the Obama administration when the president, citing statistics from the U.S. Department of Labor, noted that women made 77 cents for every $1 that men made. Gender wage disparity in America is real, and over the course of their lifetimes, women tend to make less money than men. However, there is more to the gender wage gap than just a simple number.

Data Behind the Gap

In 2014, the wage gap got slightly better, according to the American Association of University Women. During that year, women made 79 cents for every $1 that men earned. That figure takes into account men and women who work full-time hours over one year. The difference in the median annual earnings creates the wage disparity between men and women. In 2014, women working full-time throughout the year earned a median salary of $39,621. Men, by comparison, made $50,383 within the same period. This means women, on average, earned 79 percent of, or 21 percent less than, what men did in that year.

The AAUW also reports that the gender pay gap was slightly lower when based on weekly earnings. On average, women made 19 percent less than men per week. The difference was just 2 cents for every dollar, or 2 percent, when the AAUW compared weekly versus yearly earnings. These figures come from nationwide data, but the numbers for each state are different.

In April 2015, Pew Research Center developed its own analysis of the data. Using the Obama administration's numbers, the think tank estimated that women would have to work 60 more days per year than men to make up the gap in annual pay. That amounts to three months of workdays for five days per week.

The group went one step further and added part-time work into the equation, coming up with a pay disparity of 84 percent, instead of 77 or 79 percent. Based on that figure, women would need to work 40 more days per year to catch up to men. Pew Research also notes that young women made approximately 93 percent versus men of the same age in 2014.

Location is one factor that may improve or worsen a woman's earnings as compared to men's. In 2014, the average working woman in New York earned 87 percent of what men did. The median salary for women in the state in 2014 was $44,781, or $5,000 more than the national median. Men, on the other hand, earned $51,580, which exceeded the national average by slightly more than $1,000. In New York, the wage gap between men and women was a lot less in terms of annual salary.

In Illinois, 2014 salaries revealed a different situation. Women earned a median income of $40,898 per year versus $51,652 that men did. These figures are more in line with the national average at 79 percent. Louisiana was the state with the lowest female-to-male earnings ratio in 2014. Women earned $31,586 per year compared to $48,382 for men, or 65 percent. These state-based figures examined workers 16 and older who worked full-time and year-round.

PayScale notes that some careers and industries have disproportionately more men than women, and vice versa. Software developers, construction project managers and computer systems administrators all employ men 89 to 91 percent of the time in these professions. The median pay for these jobs grows between 62 and 72 percent over the course of a 25-year career.

Women dominate careers such as elementary school teachers, registered nurses and human resources administrators. Women also hold between 86 and 90 percent of the positions in these fields. However, the median pay growth over 25 years is between 27 and 57 percent for these three professions. Plus, these female-dominated jobs earn less money over an entire career than the three male-dominated ones. The one exception is the starting pay for registered nurses, which is higher than any of these six positions.

No matter what types of statistics or methodologies are used to calculate the gender pay gap, one thing is certain: Women do make less than men. However, the reasons why may vary.

Why Does the Gender Pay Gap Exist?

Some studies revealed that women make less than men because they choose to take time off to care for children or elderly relatives. PayScale and Pew Research both say women generally go into careers that pay less than others. Men hold more professional positions in legal, financial and managerial positions than women do. There is also a larger number of men who pursue science, technology, engineering or math degrees as compared to women. STEM careers come with higher pay than other professions.

Women who do reach high-paying positions, such as business managers or lawyers, tend to leave these jobs sooner than men, according to The Huffington Post. A 2006 study showed that women left higher-paying jobs, where salaries were very close to those of men's earnings, because they wanted to spend more time raising a family. Men, on the other hand, kept climbing up the corporate ladder of stressful, high-paying jobs.

The gender pay gap is still a reality of the American workforce. Women make up more than half of the labor force, but they continue to earn less than male counterparts in several professions. The reasons for pay disparity differ, however. Often, this difference in pay comes down to career choices made by men or women, while at other times, it is due to unfair discrimination, for which offending companies can be held liable in court.

Photo Courtesy of kristine135 at Flickr.com