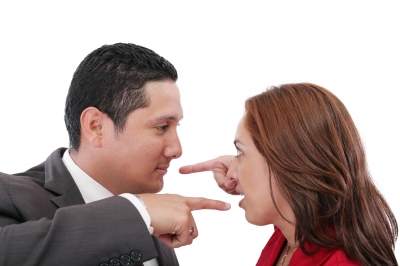 The differing personalities, ambitions, and needs of people who interact with each other regularly in the workplace are bound to result in some conflicts. Even the most harmonious work group will occasionally battle over issues. Learning how to effectively handle work conflicts as a human resource professional can minimize the negative consequences that often result from the clashing of wills, and promote a more peaceful workplace.

Conflict comes in a variety of flavors, ranging from simple disagreements about strategies to ferocious no-holds-barred arguments. Resolving work conflicts requires an understanding about what caused the conflicts, and the most common cause of contention in the workplace is poor communication. Communication issues can lead to misunderstandings that result in hurt feelings, lost productivity, and lackluster performance. Poor communication can also drive disputes underground, where they can lead to subtle acts of sabotage by the parties involved.

Other causes of work conflicts include:

Very few people like being in the middle of arguments, choosing instead to ignore the problem and hope it goes away. This approach rarely works and often only causes work conflicts to continue to grow. Solving workplace problems requires tackling them head on. The sooner work conflicts are dealt with, the sooner the people involved can return to being happy and productive members of the group.

The next step to resolving conflicts is to improve understanding of the issue among all parties involved. Allow each person to voice his or her viewpoint. It's easy for emotions to get tangled up in the matter, so make an effort to remain focused on the problem. Come to an agreement on the facts or objective elements of the situation. For example, John and Mary may disagree about the direction a project is taking. But it might be that each person has interpreted the client instructions differently, which is preventing them from moving forward.

After sussing out the root cause of the problem, explore possible solutions and negotiate a resolution. To ensure everyone is satisfied in the end, each person should have some say in the outcome. While you may have an idea of how the situation should be resolved, it's important to be open to all ideas; it's possible that another solution may be devised that results in a win-win situation.

It is important to be calm and patient when dealing with work conflicts. Solving interpersonal problems that erupt isn't always a neat affair, and you may spend days, weeks, or months dealing with the issues before they are resolved. However, persistently working on the problem can lead to a happy ending for all.