The Order in Which You Eat May Affect Your Blood Sugar 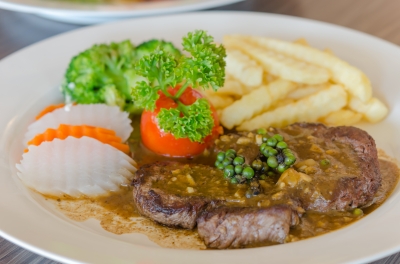 A study published in June 2015 shows how people with type 2 diabetes may lower blood sugar by eating foods in a particular order during a meal. The potential benefits of consuming food in a certain sequence offer patients a new way to manage diabetes at home without adding a lot of extra work.

Researchers studied 11 people with type 2 diabetes, all of whom took metformin and were obese at the time of the inquiry. Doctors at Weill Cornell Medical College in New York noticed that when participants ate vegetables and protein before carbohydrates during a meal, blood sugar levels were lower two hours afterward than when food was consumed in the opposite order. Instead of avoiding certain foods, patients could train themselves to eat foods in a particular order.

Everyone in the study fasted overnight for 12 hours before consuming a 628-calorie meal containing protein, carbohydrates and fat. During the first week, participants consumed carbohydrates first, then protein and then vegetables. Meals consisted of bread, orange juice, skinless grilled chicken, a small salad and then steamed broccoli. Participants ate the chicken and vegetables 15 minutes after the bread and orange juice.

Researchers could not determine why this process works to reduce blood sugar levels in patients. One suggestion revolves around slowing the body's absorption of glucose, thereby providing a way to better control diabetes. A follow-up study should determine what happens to the body beyond the two-hour mark. Doctors have said the next study measures blood chemistry for longer times after meals and takes into account other hormone levels in the body to determine what happens in the body more precisely. If doctors can prove why food order matters, it may lead to new recommendations for diabetics.

This food order research follows another diabetes study from April 2015 that claims walking 15 minutes per day may reduce or eliminate sugar cravings. The idea behind that study was that overweight patients had enough cognitive stimulation to forget about food cravings long enough to get past the need for sugar. Walking, combined with food order, may help regulate blood sugar even more without requiring drastic dietary changes. Moving forward, both studies can help doctors evaluate the effectiveness of lifestyle changes versus drugs in managing diabetes.

As of 2015, nearly 29 million Americans — 9 percent of the population — suffer from diabetes. The disease is linked to obesity in adults. If patients can just alter the order in which they eat certain foods, this may give them a new weapon to fight diabetes and help maintain blood sugar levels. Proper diabetes control leads to lower medical bills and possibly a better quality of life.