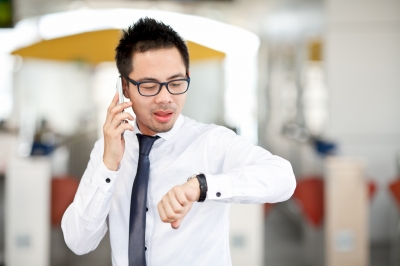 Wearable devices like Google Glass, Fitbit and Apple's iWatch are just a few of the high-tech wearable devices that are sweeping the market. Although these technologies don't yet rival the modern smartphone, analysts predict that the market for wearable technology is set to grow rapidly in the coming years. Despite this, manufacturers are still asking themselves whether this is a stable market or a fleeting technology fad.

Fitness trackers, smartwatches and smart glasses offer convenience and flexibility for customers, allowing them to access information, monitor their health and even check social media messages without having to carry a handheld device. According to Ramon Llamas of the International Data Corporation, more than 6 million wearable devices were shipped worldwide in 2013, and that number is expected to triple by the end of 2014. Predictions show that store shelves may carry more than 110 million wearables by the time 2018 rolls around. Even wireless companies are making it easier for consumers to purchase wearable devices, with providers like AT&T offering discounts with the purchase of other products.

However, there is also evidence to suggest that this wearable craze is a fad that may not last. An Endeavor Partners white paper states that roughly 30 percent of consumers in the U.S. who purchase wearable devices stop using them within six months. Additionally, approximately 10 percent of U.S. adults who own a wearable activity tracker have quit using it.

Whether or not the wearable trend continues to grow over the years, experts predict that the technology is not likely to ever become a complete replacement for the ever-popular smartphone. According to Gartner's lead wearables analyst Angela McIntyre, the screen of a smartphone offers a more convenient display for browsing the Internet and viewing pictures. Wearable technology has a long way to go before matching a smartphone's capabilities. IDC predicts that shipped smartphone units are to exceed 1 billion in 2018, dwarfing the expected shipments for wearable devices. On the other hand, the NPD Group's wearable technology study reveals that more than half of Americans have not heard of wearable devices, so it is possible that sales may rise as consumers gain awareness.

Although it is likely that the market for wearable devices might experience a surge in the coming years, the distant future is still unclear. Companies that begin releasing more unique, advanced technologies that rival smartphones are sure to find success, but single-use wearable devices may border on becoming a technology fad. With companies like Apple, Google and Sony behind the wheel, however, wearable devices just might become the technology of the future .

Photo courtesy of Chaiwat at FreeDigitalPhotos.net