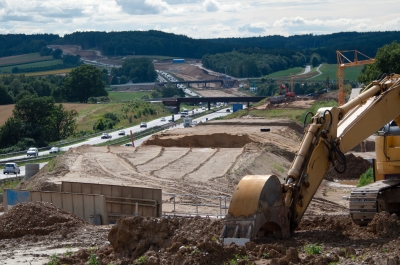 The latest jobs report from the Federal Reserve has been released, and it paints a picture of the same slow economic recovery across the country that Americans have gotten used to over the last several years. Unfortunately, construction jobs are especially sensitive to periods of either slow growth or economic contraction. This is because construction jobs—which are usually tied to the pace of new construction and, hence, rising consumer demand—are usually tied to a specific geographic area in a way that service jobs, for example, just aren't. This makes construction jobs vulnerable to not just nationwide economic slumps but to regional and local variations. Even during a period of general economic recovery, it's still possible for specific areas within the country to experience contraction in the building trades in response to local factors. Here are three states where low demand means you're likely to have trouble finding open construction jobs.

Nevada rode the crest of a construction boom for several decades, from the early postwar era to the end of the century. That boom crashed hard, however, with the overall collapse of the residential housing market from 2007 on. Much of the growth, and the construction jobs that depended on it, came to a halt during the 2007 to 2012, with the state suffering through a massive 63 percent decline from 146,400 construction jobs in 2007 to only 54,300 such jobs in 2012. While the rate of decline has eased somewhat, Nevada has yet to see any recovery, with a sustained 1.1 percent loss through 2013.

California was at the heart of the great real estate boom of the last century, and it had the furthest to fall. In the same period that saw new construction collapse in Nevada, California lost a solid 40 percent of its construction jobs. Combined with a mortgage crisis, a credit crunch, and a drastic fall in housing prices, California has yet to replace the almost 400,000 lost construction jobs it shed during the recession. It should be noted that California, unlike Nevada, is on the path to recovery with an almost 12 percent gain in 2013, but there's still a lot of ground to recover, and competition for the available construction jobs remains stiff as a result of the displaced construction workers trying to get back into the field.

Much like Nevada, Georgia still isn't recovering from its sharp loss of construction jobs, which totaled almost 80,000 jobs from 2007 to 2012, equaling a decline of over 34 percent. In 2013, Georgia continued to slip, with a further 2 percent decline. This is despite large capital investment in construction projects in Cobb County, and elsewhere, of the sort that have been working to stimulate new construction in other states such as Connecticut.

The period of the Great Recession left scars across the country. Construction was hit harder than most industries as a consequence of its strongly local character, its sensitivity to economic contraction, and the destructive effect of declining real estate values. While the jobs report does give some signs of hope, several states clearly have a long way to go before they recover their lost construction jobs.