Being Assertive Without Being Pushy 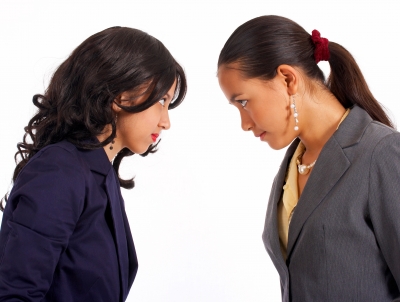 Workplace conflicts are bound to come up when you collaborate with people of various personality types. Burying your feelings may work for a while, but voicing your concerns is the only way to put an end to offensive behavior. At the same time, it's important to maintain good relationships and be respectful of co-workers who think and behave differently from you. Learn to be assertive, so you can handle work conflicts with tact.

Take an Objective View of the Situation

Do your best to assess a workplace conflict from an unbiased perspective, instead of letting negative emotions take over. The team downer who always criticizes your ideas may be unhappy and insecure, rather than jealous. The boss who keeps piling on last-minute work may not realize how much you're juggling. Whatever the case, dealing with confrontation in an aggressive way makes your co-worker feel attacked. On the other hand, taking an objective view helps you stay calm and persuade your co-worker to listen.

Plan what you want to say in advance using simple, unemotional language. Explain how the negative behavior affects you or the work environment. Let's say you're confronting a chronic faultfinder. You could say, "When you focus on flaws, the team can't have a productive discussion about the positive parts of an idea. We end up dismissing good ideas, instead of working together to develop them." Using a logical cause-and-effect statement helps your co-worker understand how his actions are fueling workplace conflict. The goal is to be straightforward without provoking a defensive response.

Describe How the Workplace Conflict Makes You Feel

Although you don't want to start a war with a colleague, it may be helpful to explain why the situation is personally damaging to you. For example, you could state: "I respect your opinion and work really hard to research good ideas. I feel unvalued when my efforts are disregarded." A co-worker who doesn't intend to be hurtful is likely to feel compassion when you're honest and open about your feelings.

Invite Feedback, and Detail the Pattern of Behavior

Once you put your feelings on the table, you can't control how the other person responds. Whether your co-worker is surprised, angry or embarrassed, give him a chance to consider your statements and explain his behavior. Showing assertiveness may be enough to win over a colleague who's comfortable with constructive criticism. If your co-worker refuses to acknowledge your concerns, offer specific examples of the negative behavior. Don't present these details as accusations. Simply try to drive home the message that you want to resolve the workplace conflict in a way that benefits both of you.

Dealing with confrontation is hard, even with years of practice. Take initiative to end a workplace conflict, but be aware that some people need time and space before they can think objectively about a situation. Every person has unique reasons for their behavior and emotional responses, so getting to know co-workers can help you put their actions in context.