Can Amazon Survive as a Pure-Play Retailer? 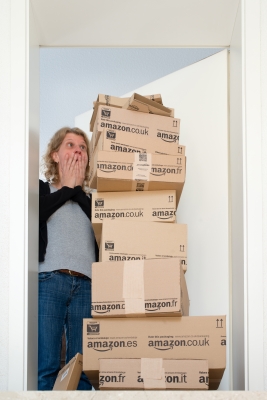 Online commerce giant Amazon.com held its first Prime Day shopping event to celebrate the retailer's 20th birthday. The company claims it was a smashing success, despite thousands of shoppers expressing dismay on social media. Despite the online juggernaut's success as a pure-play retailer, the company may need to adapt to physical stores to grow its revenue stream.

Some retail experts believe Amazon's online commerce model runs counter to current trends surrounding physical stores. Retailers such as Target, Wal-Mart, Staples and Best Buy have found ways to blend locations with warehouses. Customers can purchase items on websites and have them shipped to stores for free rather than pay $99 per year to get unlimited two-day shipping to someone's home.

The fulfillment center model makes returns easier when brick-and-mortar locations accept returns, refunds and exchanges. This obviates customers having to wait several days to return an item to a far-away Amazon warehouse after talking to a representative over the phone. Macy's, Nordstrom and Dick's Sporting Goods have all expanded their online commerce to complement hundreds of stores already serving as anchor retailers in malls and shopping centers. These stores represent major competition for Amazon's market share.

Amazon may recognize this online commerce model as unsustainable. In early 2015, the company sought to purchase some of Radio Shack's failing assets to create small stores where customers can pick up items purchased on Amazon. Even a small space, with one or two employees, may facilitate better customer service because shoppers have someone to talk to in person as opposed to a disembodied voice on the phone telling exactly how to make a return. Instead, Amazon stores can facilitate returns right away.

Another trend Amazon must watch revolves around shopping malls. Occupancy rates of shopping malls rose to 94.2 percent in 2014, a 27-year high. Traditional stores and clothing retailers have moved out, while technology companies, health care clinics and gyms have moved into large mall spaces. Technology stores making headway in malls also mean more competition for Amazon. If the online retailer can snag a small storefront in every mall in America, retailers should be wary.

Two-thirds of retail CIOs believe their companies should combine e-commerce, mobile, social, paper catalog and store sales to best serve all types of customers. That way, a store's customer base remains as wide as possible.

Digital interactions influence as much as 64 cents on every dollar spent in brick-and-mortar stores, so huge retailers must adapt to customer preferences for using apps while in stores to point the way to great deals. Online commerce should be part of the digital push.

Amazon's model of less expensive shipping may not be sustainable. Amazon has billions of dollars of cash on hand. Perhaps it can use that money to create brick-and-mortar stores that facilitate more steady growth in traditional sectors rather than innovative, forward-thinking concepts.

Instead of profits given back to shareholders, the online commerce giant continues to push for growth. The idea behind this growth remains capturing a greater market share of customers who continually want personalized shopping experiences and much better convenience. Unfortunately for Amazon, it may have to move in other directions to compete.