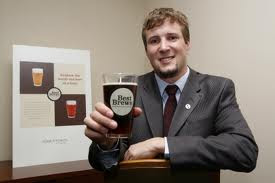 Scott Kerkmans has one of the most coveted jobs in the hotel industry. The 28-year-old was recently named Chief Beer Officer (CBO) for the Four Points by Sheraton chain.

Scott says many of his friends are just jealous of his rather unusual job. A post for which Sheraton received a record-setting 8,000 applicants. No stranger to brewing, Scott's beer credentials include a job as a brewer at the Alaskan Brewing Company.

The job of CBO entails considerable travel. During an average year, Scott covers the country, helping to publicize Sheraton’s goal to offer a variety of interesting beers, many from local breweries. Scott meets with breweries and people in specific locales to choose or work with a property to select an appropriate beer for that region.

While on the road, he hosts beer dinners and consults with various chefs at different locations. In addition, the CBO is responsible for sharing his in-depth knowledge of the wide world of beer on a monthly blog and help cultivate, curate and promote Best Brews’ offerings at brewery tours, beer festivals, and on bar stools across the country. One additional perk of the job is free beer delivered to Scott at no cost.

For an added perspective, check out this CBO video (video starts about 20 seconds into the stock exchange floor scene).