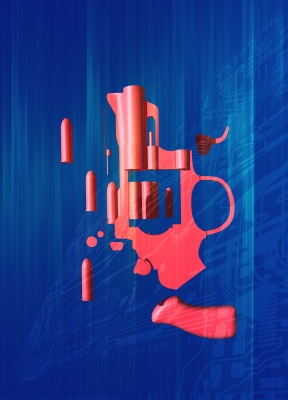 Almost since the advent of the first generation of 3D printers, sensible people have been worried about the coming of the 3D printed handgun. Such a weapon, which could theoretically skirt state and federal gun control laws, might be built anywhere by just about anyone. The worries grew so acute that, by 1988, Congress acted to outlaw firearms that were "undetectable to a walk-through metal detector," since the great fear at that time was a weapon made from nonferrous epoxies. More recently, the concern has been that of conventional firearms being churned out by modern 3D printers and put into circulation in a totally untraceable way.

Well, that finally happened. The California-based engineering firm of Solid Concepts has managed to construct a replica of the venerable Model 1911 .45 cal. ACP, also known as the gun your grandfather carried in the Pacific. According to the company press release, that particular model was chosen primarily because it was in the public domain.

Choosing a royalty-free design is just one way Solid Concepts has demonstrated that it knows what it's doing. Another clue that the company isn't just grabbing headlines is that before it began the manufacturing job, the company applied for and was granted a federal firearms license that puts the whole affair on a respectable legal footing. This helps to avoid some of the politicized embarrassment suffered last year by Defense Distributed, the Texas-based company that was singularly unsuccessful in its 2012 attempt to produce a gun made entirely out of parts synthesized on 3D printers.

Unlike Cody Wilson of Defense Distributed, the team at Solid Concepts denies making any kind of political statement. Instead, the objective all along was to demonstrate the viability of 3D printers to mill precision equipment with high tolerances and to dispel the notion that 3D printers aren't able to produce anything strong enough for real-world applications.

Whatever the intent, the Solid Concepts team has done something extraordinary. By taking an involved and complicated manufacturing process out of high-capital-investment centralized factories, it has demonstrated the viability of distributed production as a real alternative to more traditional methods.

On the off chance that your head is now swimming with visions of kids running off copies of the gun with the 3D printers they got for Christmas and plans they downloaded from the Internet, you can relax. As Solid Concepts' own vice president of marketing, Scott McGowan, told an interviewer: "There are barriers to entry that will keep the public away from this technology for years." Foremost among these is the sheer cost. The type of 3D printers Solid Concepts worked with can't be found for less than $30,000. In a world where a serviceable—and untraceable—gun can be had for $50, 3D printers of this type have a long way to go before they justify the fears of gun control advocates that a 3D printed handgun will soon be in every school.