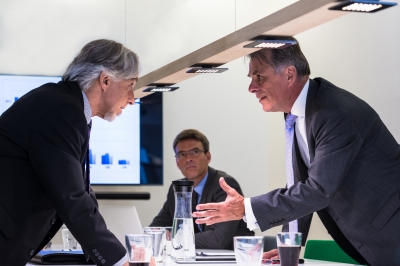 It isn't uncommon for an organization to have at least one negative employee. This person might try to find flaws in any situation, spread gossip, undermine managers, harass co-workers or file excessive complaints. Unfortunately, managers are not always quick to give these team members the boot, especially if they're top performers at the company. If you're stuck working alongside an individual with a sour disposition, here are some tips that might help.

It's very difficult, if not impossible, to change someone's personality, but adopting an attitude of acceptance can make working with a negative employee more bearable. A common reaction to dealing with negative people is to criticize, condemn or shun them, which can cause conflict in the workplace. To maintain a professional atmosphere, just accept the person for who he is. Acceptance doesn't mean you approve of his attitude, however. It simply means you accept the reality of who he is without feeling angry or bitter.

Try to understand why the negative employee has such a bad attitude by putting yourself in his shoes. Is he a dedicated, top-performing worker who was passed over for multiple promotions? Does he face workplace discrimination? Is he having problems at home? Does he have a legitimate grievance with the company? Think about how you would feel if faced with these issues and how you'd want others to treat you. Having problems does not excuse the employee's negative behavior, but it can help you determine the best way to deal with him.

Offer support to the negative co-worker, and make sure the offer is genuine. People with negative attitudes might expect poor treatment from others, as they usually tend to treat others poorly. Avoid falling into this cycle. You don't have to be best friends with the negative employee, but offer to help out if you see he's swamped with work, or ask for his opinion on a project to let him know you value his input. These simple gestures promote a better work atmosphere and can help build mutual respect and foster a positive relationship between you and him.

Never fall victim to the negative employee's attitude. Exercise self-control at all times by avoiding office gossip and never giving your opinion on controversial or sensitive office matters. Resist the temptation to complain, especially in the negative employee's presence. If the person is rude to you or expresses anger, take the high road by walking away or keeping your voice calm in order to maintain a professional atmosphere.

A negative employee can hamper productivity more than you might think, since his personality has the ability to infect you and other co-workers. Disarm the negative co-worker of his power by remaining as positive as possible during conversations and doing your best to build a proactive, strategic partnership with the individual.

R29 Binge Club: Girlboss Episode 1-13 Recaps
news via Refinery29
Most Americans Wanted The U.S. To Stay In The Paris Agreement. Will...
news via Politics - The...