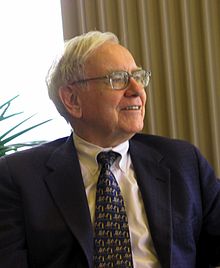 This week, I've been thinking about talent and how easily it can be wasted. We tend to put way too much emphasis on talent, rather than hard work, because just having talent isn't enough to be successful. In order to excel at anything, you have to create good work habits, and practice, practice, practice. Whether you're trying to improve your art or become a better salesperson, developing good work habits is the single most important thing you can do. During a recent interview with Fast Company, Warren Buffett said that having the right work habits was the key to his success. He said, “Imagine you could be given 10 percent of the future earnings of one person you know. Who would pick?” Would you pick the most talented person you know? The fastest runner or the smartest person you know? According Buffett, “You're going to pick the person that has the right habits.” It's hard not to believe him, after all: he's worth over $50 billion and has a reputation for building and maintaining friendships over decades.

If that wasn't convincing enough, the book Daily Rituals: How Artists Work, explores the work habits of a wide array of famous artists. Although each of them have their particular quirks, there were a few habits that they all had in common. Interestingly enough, the things they had in common were almost exactly the same things as Warren Buffett mentioned during his interview. Here are a few of them:

Do something every single day. Every single artist listed in the book set aside time each day to work on what they loved. Although some of them only spent 30 minutes while others spent several hours, they all kept working. Warren Buffett said that your work should be a canvas and you should paint on it every day.

Take breaks. Creativity comes in spurts, and most of us aren't able to sustain work for extremely long periods of time. Almost all of the artists spent fewer than five hours a day actually working on their craft. With the rest of their time, they took breaks, had experiences and networked with others. Sometimes, it's the experiences you have when you're taking a break that can inspire your next masterpiece. In the business world, working for too long on one task can lower your productivity. Plan time to meet with others to have lunch, and after work, cultivate a hobby.

Get inspired. View everything as an opportunity. Take chances and try new things. Venturing outside of where you're comfortable will help you find inspiration. If you're still stuck, find a hobby or cause you believe in.

Don't listen to self-doubt. There are plenty of people in the world who will tell you that you aren't good enough, that you don't have what it takes to be successful. Don't allow yourself to be one of them. Warren Buffett mentioned how self-doubt can form a “fun house mirror” distorting our reality and making us incapable of seeing ourselves as anything other than a failure.

You are who you know. The old saying “Birds of a feather flock together” has a lot of truth to it. We tend to pick up the habits of the people around us. These people can either lift us up or pull us down, so it's important to choose your friends wisely and try to surround yourself with people who are more successful than you.

Work to overcome fears that hold you back. If there are things that you know are holding you back, like shyness or a lack of computer skills, actively work to correct them. When Warren Buffett realized that his fear of public speaking was hurting him, he signed up for a Dale Carnegie course. Unfortunately, he was so afraid of facing that fear that he didn't even go to the class. Instead, he waited a few more years and finally was able to get the help he needed to feel comfortable talking to large groups. He credits his ability to successfully communicate with others as a building block to his success.

No matter how talented you are, how passionate you are about what you do, you will still have to develop good work habits and be willing to do the work of getting better every single day. Even Mr. Buffett, who already has enough money for several lifetimes, doesn't think that he's done just yet. He still works and practices his skills every day. If he doesn't think he's successful enough to let his talent carry him, I don't think any of us are either.

What work habits do you think are the most important? Please share your thoughts in the comments.