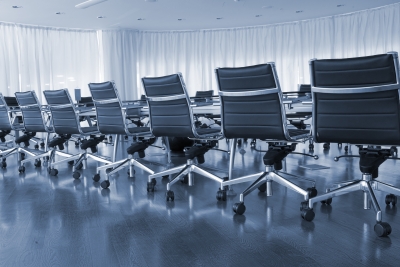 The open office plan is one of the latest innovations in the design of office workplaces. The intent of open office plans is to foster creativity and interaction among employees, in the hopes that greater collaboration will lead to greater innovation and productivity. However, it is becoming clear that the liabilities of open office layouts may in fact outweigh their positive attributes.

Open office plans are intended promote what some designers like to call "serendipity," that ineffable quality that allows co-workers who would otherwise not interact to happen into a collaborative moment. While it is crucial to promote collaboration among employees rather than allowing a spirit of competition to grow, there is no real evidence supporting any claim that open office plans do this. In fact, open office spaces may at times decrease interaction since employees are aware that everyone can overhear their conversations. Workers in an open workplace tend to create their own walls of privacy any way they can, often by wearing headphones while working. Headphones are often needed for workers to deal with the large amount of noise produced in an open office. Human speech is one of the most distracting noises, and being surrounded by it in an open office plan makes it difficult for workers to focus on the tasks before them.

In open office workplaces, the invitation to interrupt co-workers is a constant issue. Because no cubicles or doors separate workers, the implication of the layout is that each worker is constantly available to interact with other workers. If the interrupted worker is busy thinking, writing or trying to meet a deadline, the constant interruptions are a great blow to productivity. Being surrounded by distractions has long been shown to cause declines in creative output, and the open office plan is designed to allow distractions to occur.

A great deal of office work must be done by one person working alone. Allowing workers privacy in which to work lets them focus and be productive. People with introverted personalities in particular require separation from others to be productive and are therefore the most impacted by open office layouts. Given that introverts comprise up to 50 percent of the population and tend to be the creative types prized in many organizations, it makes sense to provide them with an office environment that fosters their creativity. If you are saddled with an open office workspace, try to create private meeting or conference rooms where small groups can convene without worrying about being overheard or distracting others. Even small alcoves where individuals can retreat to focus and work without the worry of interruption can make a big difference.

Promoting collaboration, however, is not dependent on any particular office space design. While the open office plan may be here to stay, at least for the short term, given the amount of money and effort being spent on its implementation, allow employees a mix of privacy and space in which to interact to foster productivity and innovation.