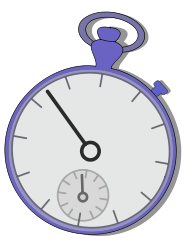 Instead of following your passion, it's a better idea to follow your time. What do you spend the most time, aside from work and chores? Yes, passion is important, but it simply isn't enough. Passion is the quick spark of interest that gets you headed in a specific direction, but just because you really love to do something doesn't mean that it would be profitable, practical or even that you'd be good at it. For example, I love to sing. I sing all the time – in the car, while I'm cooking and yes, even in the shower sometimes. The thing is, I'm not very good at it. If I were to follow that passion, I would probably be very disappointed in the results.

In Malcom Gladwell's book, “Outliers: The Story of Success”, he says that it takes about 10,000 hours of doing something before you become competent enough to be considered a professional. That's a whole lot of time – in fact it works out to be about 417 days worth of non-stop practice. When you look at a number like that, it becomes clear that simply being passionate about something isn't enough – you have to be willing and able to put in the huge amount of time that it takes to get really good at it.

For those of us who aren't sure exactly what we are passionate about or who have a wide range of interests, it's a good idea to first look at what we've devoted the most time to. For example, Michael Jordan is passionate about sports. As a professional basketball player, he's often hailed as the best player of his era. However, he is also passionate about golf and baseball. As a professional baseball player, he wasn't nearly as successful. Was it because he lacked the athletic skill to play or was it a lack of desire? Absolutely not. His lack of success at baseball was due to the fact that he had spent much, much more time practicing basketball. Simply being an amazing athlete and having a passion wasn't enough.

If you've considered following your dreams and chasing your passion, take an honest look at how you spend your time. It's there that you'll find the thing you're the best at.

What do you think about the 10,000 hour rule? Please share your thoughts in the comments.

Easily Distracted? Here Are 3 Careers for You!
article posted by Carlee Nilphai

An EVP at Microsoft gives his take on the technologies that will sh...
news from Markets