Great Moments in the History of Logistics: The Transcontinental Motor Convoy of 1919 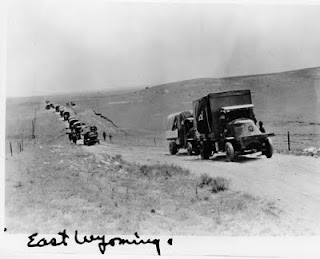 Our modern system of transportation, which makes it possible for trucks to travel from coast to coast in six days, might not have come to pass were it not for an epic 62-day coast-to-coast trek in 1919.

That trek, known as the First Transcontinental Convoy of the Motor Transport Corps, was part military experiment, part propaganda campaign. The experiment: To see how quickly and easily the new motorized vehicles the U.S. Army used in World War I could get from the East Coast to California in the event of an attack on the Pacific coast. The propaganda campaign: To build public support for building paved all-weather roads throughout the country.

The experiment nearly failed. Vehicles were blown off cliffsides, got stuck in mud and sand, and crashed through bridges not built to handle their weight. The entire convoy was nearly lost when it encountered quicksand while crossing Utah and Nevada; as it was, nine of the 90 vehicles that set forth from Washington on July 7 never made it to San Francisco, the convoy's final destination. The survivors steamed into the city via ferries across San Francisco Bay on September 7.

The propaganda campaign, however, succeeded at making the point the convoy's chief promoter, the Lincoln Highway Association, wanted to make. The convoy used the highway to cross the country, but once past Illinois, it wasn't much of one: for much of the convoy's trip through the western half of the country, the road was little more than ruts in the earth or tracks through the desert. The convoy spurred public campaigns for paved roads across America, leading to the first federal highway bill in 1921, which financed the construction of the U.S.-numbered highway system.

One of the military officers who traveled with the convoy was a young lieutenant colonel named Dwight David Eisenhower. His experiences with the convoy made a lifelong impression on him. A quarter-century later, in another world war, Eisenhower had another road trip that shaped his thinking: the speed with which Allied forces could supply troops over the German autobahns convinced him of the need for similar superhighways in America. As President, Eisenhower promoted and signed the law that gave America the Interstate Highway System, which today bears his name.

Photo from the collection of the Dwight D. Eisenhower Presidential Library and Museum, Abilene, Kan.

Get your career moving! LogisticsJobSite.com delivers the goods.