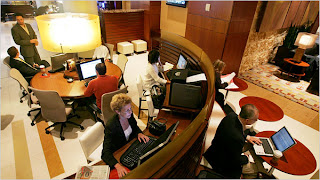 Wireless Internet access, on-demand cable television, and instant access to movies and music are amenities that guests have come to expect during their stay in a quality hotel.

In fact, many hotels are working with technology companies to maintain their edge in the eyes of tech savvy guests. Sheraton asked Microsoft to create its new lobby lounges where guests can use public computers to check their e-mail, print boarding passes and record video greetings for family and friends. Westin teamed with Nintendo to equip some of its fitness centers with Wii consoles and games.

A few years back, the American Hotel & Lodging Association (AH&LA) conducted a Lodging Survey to track emerging trends in the lodging industry. Over 9,300 U.S. hotel properties were polled on more than 100 areas. Among these were security and technology features that clearly underscored a trend to increased technology at virtually every level:

More In-Room Voice Mail – Up from 72 percent in 2004 to 86 percent in 2006. Every hotel in the luxury chain scale indicated they offer voice mail.

Internet Booking – A full 98 percent of guests used the web to book their rooms, up from 89 percent in 2004.

Clearly, the hospitality industry is moving toward providing guests with the technology they need and want to stay connected with friends and conduct business. I recently visited several high-end hotels in San Diego and found that every one of them now offered Wi-Fi access even in lobby areas.