How Do Your Resume Bullets Stack Up? 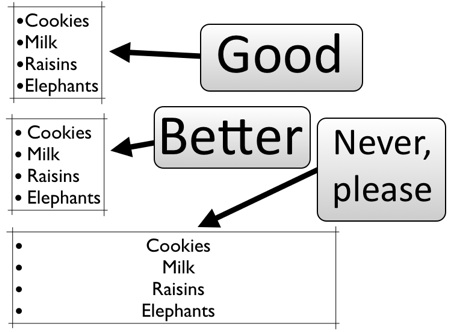 Since applicant-tracking robots have taken over the hiring process and automated the job search of thousands of companies in the United States, candidates for jobs have to learn to get past the automated overloads while submitting a great resume for humans to read. Enter resume bullets, a style necessitated by the way humans quickly scan information. When you want to impress a hiring manager with your resume, bullet points are the way to go.

Strong resume bullets showcase your top skills and draw the attention of a person's gaze right away. Because the bullet points highlight your best attributes, leave the boring, mundane details of your professional life to the nonbulleted text.

Your most important skills and accomplishments go toward the top of the page. That's because people start reading at the top and work their way down. Fashion three to four resume bullets that highlight your career, and make a career snapshot of the largest projects you completed or the highest accomplishments you achieved. This could include something like:

Of these two, put the better one first on the page. The top one shows more verifiable details, so that one should go first in this example.

Resume bullets should tell a story in as few words as possible. If the employer wants to know more, the hiring manager can ask you for additional details. For example:

Both of these bullets say the same thing. One has 30 words, and the other has 16. It may not sound like much, but every word counts when it comes to a succinct, one-page resume.

Explain Why You Had an Impact

You need to do more than just say you accomplished something in your bullet points. You must explain why your accomplishment impacted your previous employer, such as:

This bullet point shows your responsibilities within the scope of your job, and also how it impacted the company in two relevant ways.

Resume bullets aren't just a short compilation of your career. They point to the most important aspects of your hard work over the years.